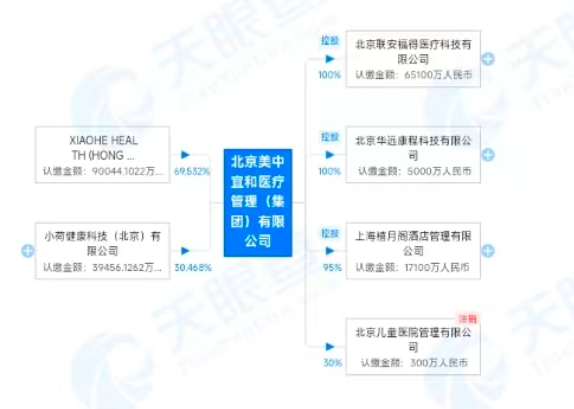 Recently, ByteDance's placement in the traditional medical field has attracted attention from the industry. According to public information, from June 22 to July 11, Beijing Zhongyi He Medical Management (Group) Co., LTD., a subsidiary of Bytedance, Xiaohe Health Technology (Beijing) Co., LTD., and Xiaohe Health Hong Kong Co., LTD., increased their holdings of relevant shares and realized full control of the company.

Following the move, Xiaohe Health's stake in US&T will increase to 30.47% from 17.57% in September 2021, while Xiaohe Hong Kong's stake in US&T will reach 69.53%. This also means that, through the two main bodies, Xiaohe realizes the full control of the United States and China Yihe.

The byte healthcare landscape is expanding

According to its official website, USCVA, a private medical institution founded in 2006, is targeting the middle and high-end consumer groups, providing services such as obstetrics, gynecology, pediatrics, assisted reproduction, postpartum rehabilitation, and postpartum rest. Up to now, U.S.-China Yi Wo has seven women's and children's hospitals, two comprehensive outpatient centers and five maternity centers, covering the Beijing-Tianjin-Hebei, Yangtze River Delta and Pearl River Delta regions. Its hospital in Beijing has a test-tube baby license.

However, it should be noted that in August 2021, the agreement between Beijing Sino Yihe Medical Management (Group) Co., Ltd. and China International Capital Corp., Ltd. to terminate the tutoring was published on the CSRC website. In light of market changes and the company's own strategic considerations, USC&T intends to terminate the mentoring and subsequent distribution arrangements. In accordance with the relevant regulatory requirements of the Beijing Securities Regulatory Bureau for the counseling work, the agreement was reached by mutual agreement between USC&T and CICC. The Guidance Agreement has been formally terminated through consultation, and there is no outstanding dispute or dispute between the parties regarding the Guidance Agreement.

Zhang Yiming, ByteDance's founder, has previously revealed his ambitions in the life sciences and healthcare landscape. In 2018, Zhang had a conversation with Qian Yingyi, dean of the School of Economics and Management at Tsinghua University. He mentioned that he had chosen biology as his major when he applied for university. When he stepped down as CEO in 2021, Zhang Yiming revealed in an internal letter that "the impact of virtual reality, life science and scientific computing on human life has dawning, and we need to break through the business inertia to explore."

On November 8, 2021, Xiaohe Medical Device (Hainan) Co., Ltd. was established with a registered capital of RMB 1 million. The legal representative is Wu Haifeng, and the business scope includes the production of Class I medical devices. Sales of medical devices; Sales of special chemical products; Artificial intelligence application software development, etc. The company is indirectly and wholly owned by Bytedance LTD., according to equity penetration information.

At present, ByteDance's medical domain includes online medical science, digital consultation and appointment, and offline medical clinics, covering drug research and development, pathology testing, offline institutions and other diagnosis and treatment links. "The company has made some progress in social responsibility and public welfare. Among them, new projects such as education and public welfare, brain diseases, and digital collation of ancient books are also being explored. I also have some personal input. Zhang Yiming said when he stepped down as CEO of ByteDance.

A senior manager of a private hospital familiar with the Internet medical and health system told China Business News that ByteDance needs to broaden the scene of traffic realisation, but the acquisition of a hospital with heavy assets does not match ByteDance's existing large traffic matrix.

"Bytedance was cautious in investing in healthcare in the past, and such a project should be a strategic investment. However, as ByteDance's strategic investment division is downsizing, this wholly-owned acquisition of USC&T is more like a decision made by the medical business division, and it is difficult to assess the strategic significance for ByteDance now." This personage expresses to first business reporter reporter.

There are many players in the Internet industry, including Ali, Tencent, Baidu, etc., but only Ali Health, Jingdong Health, Ping An Good Doctor, etc., have successfully broken through the 100 billion yuan market.

Leopard (Shanghai) medical industry institute, chief analyst at Li Yirui for the first financial journalist, said: "the state drug administration issued a draft, to prohibit the third party platform directly involved in the drug sales, technology companies in the medical field distribution is more cautious, more in the form of O2O cut into the health care industry. The development prospects and space of Internet medical treatment with offline medical support are more promising."

For Internet companies active in the field of medical distribution, health industry analyst at analysys analysis Zhang Jing told reporters, both from the perspective of policy regulation and industry at present the development of the reality, the hospital can't exist alone, but in addition to the offline hospital, thus for platform, offline layout is indispensable.

In addition, Zhang Jingwen said that the advantage of offline layout is that it can make the online to offline service more consistent, meet patients' various medical needs, improve patients' satisfaction, and realize a closed loop of medical treatment. However, it is still difficult to realize the Internet medical profit through the method of traffic import to offline hospitals. First, we can see from the market practice that the Internet medical profit has always been a difficult problem faced by the industry. The traffic cost is getting higher and higher, but the user retention is not as expected, and the profit problem has not been solved. Second, the means of traffic import may face restrictions under the background of continuous strengthening of supervision, and the effect is less than expected; Third, medical decisions are often very cautious, and it takes a long time to gain the trust of patients.

In Zhang Jing article seems, therefore, since the Internet step higher traditional medical industry barriers to entry, the crossover operation if there is no accumulation of professional knowledge and industry, but continue to use Internet thinking, use "throw money in flow" play doesn't work, need to respect the laws of the medical industry operation, pay attention to long-term accumulation, not impatient for success. At the same time, only by clarifying the roles between traditional hospitals and Internet medical treatment, strengthening the integration of online and offline, and giving play to the respective advantages of Internet medical treatment and traditional medical treatment, can the revenue be maximized.

Related news
Internet Archive: recording the forgotten Internet
How to break in the second half of the Internet (I)
The FTC is investigating Amazon's $3.9 billion acquisition of One Medical
Hot news this week
"Sheep a sheep" fire, is expected to attract hundreds of millions of financing? But it doesn't have a license...
The first "zero carbon factory" in the ICT industry, Lenovo (Tianjin) Smart Innovation Service Industrial Park is officially put into production
Baidu Ping Xiaoli: The repurchase rate of users on Baidu App reached 60%, and the daily inquiries exceeded 4 million
Billions of euros in investment, Intel Italy chip factory will be located in the Veneto region, sources said
"Sheep a sheep" the whole network burst fire! The founder was the Alma mater system of exhibition card publicity
Huawei Mate50 is on sale: Kunlun glass version is difficult to find, the maximum price increase of the Porsche series
Tencent Music back to Hong Kong behind: online music "internal volume" intensification, short video will become a new growth rate
Intel failed to deliver on its promise: Summer is over and there's still no high-end, flashy desktop graphics cards
Xiaomi Civi 2 Stable Snapdragon 7:23 87mm2 Large-area VC liquid cooling, heat dissipation increased by 200%
"Look at the weather why do I need to renew membership"? Inkblot Weather membership service is a hot topic
The most popular news this week
Huawei Smart Screen portable version released: 10.4-inch 2K screen, 10995mAh battery
The world's first 6GHz frequency Intel high-profile announcement: the lead is indisputable
Do you have the opportunity to take noise -canceling ear to damage the hearing? Experts from the Three Hospital said that
Jump ticket 2 years "pigeon king"! Avx-512 is publicly supported for the first time in the Intel 60 core
I can't afford to live without Musk's help
Mobile phone fast charge new volume king Xiaomi three new machine into the network: the highest 210W?
Secretary -General of the Federation of Federation: Foreign artificial artificial Chinese online red cars have great advantages in China
Do you want to travel to space? Aerospace expert: China already has technical conditions
The strong response to the iPhone 14 Pro Max could widen the gap between the iP15 Pro series
Intel's Arc A7 flagship graphics card debuts in private: Just these two