From Douro Land to Pride, from Perfect World to Glory of Kings Animated Series... Tencent Video has released a list of nearly 100 animation works. Online literature, e-sports, movies and TV dramas, games, various categories are feeding back the popularity of animation works.

"This is a step forward for video platforms to transform and upgrade their business models," Zhang Yi, CEO of IMedia Consulting, said in an interview with Mijing. In the past, video platforms were more likely to purchase broadcast rights, but the cost was very high. "There are still many places to develop on the platform, especially cartoons with strong IP addresses, which can meet the needs of different types of audiences."

In recent years, with the improvement of the popularity of two-dimensional culture, most of the post-1995 and post-2000 generation have increased demand for animation, and high-quality works continue to emerge.

From the perspective of the film industry, from Journey to the West: Monkey King Is Back in 2015 to Ne Zha and White Snake 2: The Capture of the Green Snake... A number of animation broke the circle, "the rise of national diffuse" more and more high voice.

Youth heart chapter, there are about blood basketball dream "left hand layup", will be online on August 19 "Dragon clan", and "Melee" "global high military"; Different World Chapter, the classic IP "Ghost Blowing the Light" series ushered in the new animation of "Ghost Blowing the Light in the South China Sea GUI Hui", and animation works such as "Coiling Dragon", "Silent House", "Demon Rule", "Whirl of China" and so on; Chivalry heart chapter, there are "Chinese Sword Legend 3" "Darts man" "Jiuzhou Diaomiao record" "Peerless double pride" and many other big IP; In the Hero Heart category, the Honor of Kings Animated series, adapted from the IP of the mobile game Honor of Kings, will be online soon. 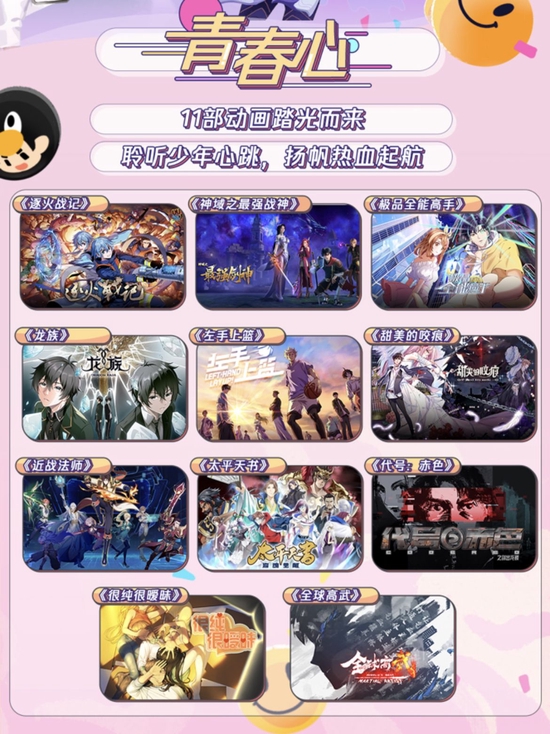 Per the reporter noticed that the release of animation works, most of the original IP has huge fan base, there are a number of adapted from article animation, such as "fight the broken sky" panlong "emperor bully" the laws of the devil, also includes the game into animation works, such as the twins wars "hero alliance" king glory animation series ".

There are also a number of producers behind the 100 cartoons, of which Yuewen and Tencent Animation are involved in the production of 20 works, and Tencent Video has also cooperated with animation companies such as Foch Films, Super God Pictures, The Force Animation and 100 Man Culture.

With the expansion of the scale of animation industry, audiences have put forward higher requirements for the freshness and richness of animation content. Wang Juan, vice president and editor-in-chief of Tencent online video, said that Tencent Video will be "sincere, confidence and determination" platform attitude, with the concept of excellence in the creation of the whole situation into the production of high-quality content, hand in hand with users and industry partners to create a hot future of the national animation industry.

Zhang Yi analysis: "This is a step for video platforms to transform and upgrade their business models. In the past, video platforms mostly acquired broadcast rights through purchasing, but the cost was very high. Movies and entertainment brought a large wave of traffic to the platform, but for the platform, there are still many places to develop, such as cartoons, especially cartoons with strong IP, which can meet the needs of different types of audience."

The pan-secondary users are expected to reach 500 million in 2023, and the global streaming media will increase the size of animation

In addition to Tencent Video, Youku and iQiyi are also adding to the animation circuit. According to the list released by Youku in June, a total of six animation works will be released, including "Tomb of God", "My Brother", "Fire and Ice Kitchen 2", "Young White Horse Drunk Spring Breeze", "The Chain into a God" and "God's Dragon Guard". Every reporter found that the above 6 anime are adapted from the net.

On July 15, the official blog of iQiyi Animation released a list of more than 10 homemade animations from three major sectors. Exclusive daily comics such as "King of the Sea", "Slam Dunk" and "Dragon Ball Series" and copyrighted animations such as "Detective Conan" and "Naruto's New Era" are also presented. 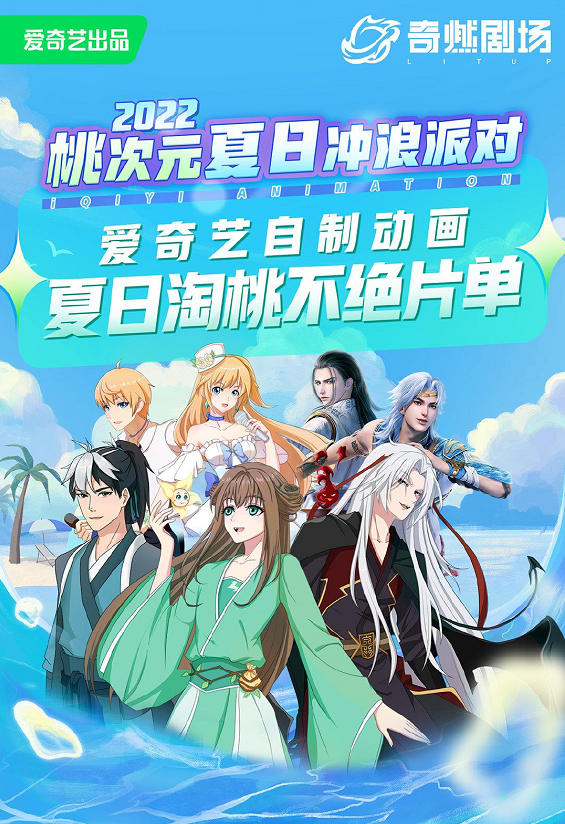 According to "2021 China's Secondary Industry Research Report", China's secondary industry has entered the outbreak period. Specifically, the overall market size reached 100 billion yuan in 2020, with an annual growth rate of 32.7%, and China's pan-secondary users are expected to reach 500 million in 2023.

"Animation has the advantage that the platform and direction of its output are large enough." "As for the platform, it not only meets the needs of its own users, but also can be distributed as a similar station, and the time limit is not obvious," Zhang said.

In addition to domestic, foreign streaming media platforms have long favored animation business. At the end of last year, Netflix held the "Netflix Festival Japan 2021" press conference, which revealed 19 Japanese animations; Earlier this year, SONY's Hotel Transylvania 4 dropped its theatrical release after repeated revisions and went exclusively to Amazon. On the heels of that, Disney announced that Pixar's Metamorphosis will be released on Disney+ streaming on March 11.

Different from entertainment, film and television and other content fields, animation is only hot for a while and has no repeatable content, but animation has the value of reuse. "For example, the Mickey Mouse series in the United States is still selling high rights." Zhang yi said.

Related news
IBM launches video streaming mobile app, which makes it easy for enterprises to contact employees from all over the world
"Generation God U" Kirin 810 gets The Linely Group's annual "Best Cell Phone Processor Chip"
Hot news this week
According to sources, SoftBank founder Masayoshi Son has not made a proposal to Samsung to invest in Arm
Brother sent a mobile phone to pay 200 yuan to pay the owner to the police: money is not scraped by the wind
China Confinement Association said on the rumor of Haitian soy sauce "dual standard": support enterprise rights protection
Mate 50 Kunlun version is in short supply! Huawei additional production capacity: October supply can improve
Apple iPhone 14 / Pro blessing, optical lens supplier Datu Guang's revenue in September 22 months new high
After a lapse of 28 years, the Chinese women's basketball team won the World Cup runner -up Li Meng's T -shirt on fire
IPhone6 officially "retired", its series sold 250 million units, second-hand purchase price is now as low as 100 yuan......
Apple responds to the iPhone accident monitoring cannot be triggered 100%: no minimum requirements are met
The revenue of Ruiyu, a major network chip manufacturer, was about 2.156 billion yuan in September, down 1.85 percent year on year
Meituan Wang Xing: Chinese auto companies will definitely win, "NIO, Huawei, ideal" will replace BBA to occupy the high-end market
The most popular news this week
Foxconn has announced that it will contract manufacture electric cars and build prototypes for INDIEV in Ohio
Latest ranking: Huawei first, ZTE fourth!
Ding Yun, vice chairman of the Huawei Supervisory Board, died of a sudden illness Huawei: He expressed deep condolences to his unfortunate death
European Union antitrust regulators have questioned Microsoft to see if it can compete fairly after buying Activision Blizzard
Today, I took a set of online signals to compare it ...
Xiaomi 13 series of news summary: a total of 3 model Snapdragon 8 Gen2 blessing
Musk wants to turn Twitter into wechat, but he may struggle to pull it off
Three o'clock before the Apple Officer who can hit the 20 % off. Before buying the machine
When playing games, I interact with my boyfriend too close: the girl after the 1 00 of foreign countries will hurt her sister
Wolf on mobile? Chinese copycat "The Phantom Wolf: Darkest Hour" hits shelves