Economic Daily: US Chip Act will not stop China Chip!

Recently, the Chip and Science Act was officially signed in the United States. The United States plans to invest more than $50 billion to promote the research and development of chips and the development of labor force, adding fuel to the "American chip". Under the bill, chip companies that receive financial subsidies will not be able to increase production of advanced processing chips smaller than 28 nanometers in China for 10 years. In other words, US legislation forces international chip makers to take sides between China and the US. China's Foreign Ministry issued a stern rebuke.

Chips are the cornerstone of the digital age. We must break through the malicious blockade and suppression of Chinese chips by the United States.

Look at the law of economics, "American core" is difficult to go against the trend.

Due to the increasing complexity of manufacturing technology, global chip enterprises generally adopt transnational cooperation to reduce production costs, international competition has been deeply bound with economic interests. Now, a U.S. effort to force chip production back to the United States and exclude China, the world's largest chip market, is going against the grain and will be difficult.

In 2021, global chip capacity was concentrated in Asia, with East Asia accounting for 73% of global semiconductor capacity, compared with 12% in the US and 9% in Europe. There is a high concentration of capacity in Asia because of its low production costs. To build a chip foundry in the United States, the cost of electricity, water, infrastructure, labor and other costs are high. Industry estimates put the total 10-year cost of a new plant in the US at about 25-50 per cent higher than in Asia. America's Chip Act offers companies a 25% tax credit on their investment, which is not worth the added cost. At the same time, the chip semiconductor industry is capital intensive and a big cash burner. Earlier, Samsung announced plans to invest $17 billion in a contract chip factory in Texas. The U.S. Chip Act will only invest tens of billions of dollars. How many factories will it support? 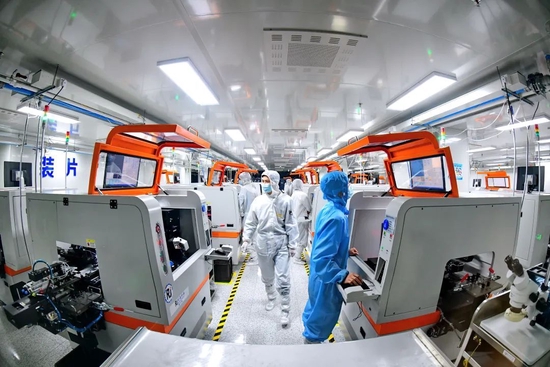 The chips still need to be sold. Global chip sales reached $555.9 billion in 2021, and China's market sales reached $192.5 billion, continuing to rank first in the world. According to estimates by the Boston Consulting Group and others, if the US adopts a policy of "hard technology decoupling" from China, it could cost US semiconductor companies 18% of global market share and 37% of revenue, and eliminate 15,000 to 40,000 high-skilled jobs. It is no wonder that American chip stocks fell sharply on the day the bill was signed, as companies were tempted to stay away from the Chinese market with tiny subsidies.

China is the country with the most complete industrial facilities and the largest chip market in the world. Since 2018, the United States has taken various chip "strangling" measures against China's semiconductor industry. But after being stuck for four years, China Chip has defied the pressure and grown even faster. In the past four quarters, 19 of the world's 20 fastest-growing chip industry companies were Chinese mainland companies. 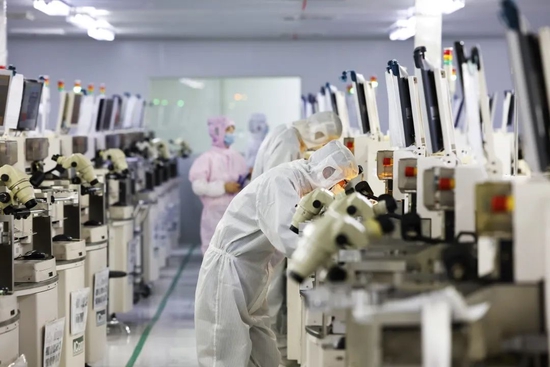 Workers work at a workshop of a chip manufacturing company in Suqian, Jiangsu province. Photo by Xu Changliang (Zhongjing Vision)

Under the extreme pressure of the United States, China's chip industry is paying more and more attention to independent replacement and industrial chain security. Take chemical mechanical polishing equipment CMP, one of the key equipment for chip manufacturing, as an example: its market was monopolized by Applied Materials of the United States and Ebara of Japan for a long time. Now, the domestic market share of 8-inch CMP of China Electronics Equipment Group has reached 70%. The Chinese people have broken the blockade of other countries many times with their own innovation in major projects, such as the "two bombs and one satellite", the Beidou navigation system and manned space flight. For the chip technology industry, we should not only see the gap to catch up, but also see the advantages and be confident.

Under the dual impact of the global pandemic and geopolitics, the global chip industry is ushering in a period of structural adjustment, which is an important opportunity for China's upgrading breakthrough. China has a huge market size, a friendly investment environment, the world's largest team of engineers, mature industrial level, complete infrastructure and strong capacity to fight the epidemic and stabilize production, which are irreplaceable in economic globalization. Economic globalization is an objective requirement of the development of productive forces and an irresistible historical trend. The "American core" is reversing the wheel of history and trying to block the path of others, only to block its own path.

Related news
I've sold train tickets for pinduoduo, and I want to call you "pinduoduo" for playing and accommodation. I didn't think of daily
Google AR AI visual world cultural heritage microbeauty hologram (WIMI.US) digital display PK traditional model
What exactly is Jim Keller thinking about leaving Intel chip God?
Chip 4 preparatory conference in Taiwan, China said it will abandon supply chain and Chip security cooperation
Hot news this week
"Sheep a sheep" fire, is expected to attract hundreds of millions of financing? But it doesn't have a license...
The first "zero carbon factory" in the ICT industry, Lenovo (Tianjin) Smart Innovation Service Industrial Park is officially put into production
Baidu Ping Xiaoli: The repurchase rate of users on Baidu App reached 60%, and the daily inquiries exceeded 4 million
Billions of euros in investment, Intel Italy chip factory will be located in the Veneto region, sources said
"Sheep a sheep" the whole network burst fire! The founder was the Alma mater system of exhibition card publicity
Huawei Mate50 is on sale: Kunlun glass version is difficult to find, the maximum price increase of the Porsche series
Tencent Music back to Hong Kong behind: online music "internal volume" intensification, short video will become a new growth rate
Intel failed to deliver on its promise: Summer is over and there's still no high-end, flashy desktop graphics cards
Xiaomi Civi 2 Stable Snapdragon 7:23 87mm2 Large-area VC liquid cooling, heat dissipation increased by 200%
"Look at the weather why do I need to renew membership"? Inkblot Weather membership service is a hot topic
The most popular news this week
Huawei Smart Screen portable version released: 10.4-inch 2K screen, 10995mAh battery
The world's first 6GHz frequency Intel high-profile announcement: the lead is indisputable
Do you have the opportunity to take noise -canceling ear to damage the hearing? Experts from the Three Hospital said that
Jump ticket 2 years "pigeon king"! Avx-512 is publicly supported for the first time in the Intel 60 core
I can't afford to live without Musk's help
Mobile phone fast charge new volume king Xiaomi three new machine into the network: the highest 210W?
Secretary -General of the Federation of Federation: Foreign artificial artificial Chinese online red cars have great advantages in China
Do you want to travel to space? Aerospace expert: China already has technical conditions
The strong response to the iPhone 14 Pro Max could widen the gap between the iP15 Pro series
Intel's Arc A7 flagship graphics card debuts in private: Just these two