Actress called out Cook: Apple rogue members can not use

On the morning of August 17th,Apple CEO Tim Cook called the iPhone App Store a rogue App,I eat too badly.

She downloaded an app from the Apple App Store, and after purchasing the membership service, it was not working properly. Then she was rejected many times by Apple customer service.

The software customer service said that the money was given to Apple, and that Apple would take a cut of the settlement, 15%, and the remaining 85% would be given to the software company. So if he wants a refund, the software can only be returned 85 percent. 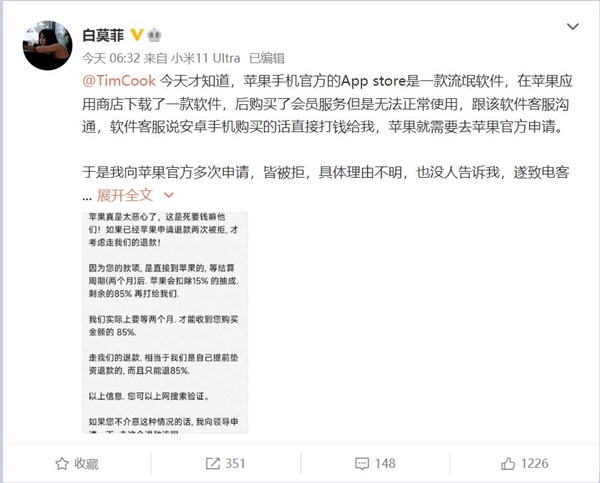 But in the global antitrust wave, Apple tax & throughout; In some countries there is resistance.

In August 2021, South Korea approved a bill banning app stores such as Apple and Google from forcing software developers to use their payment systems and charging commissions of up to 30%. When the bill is signed, South Korea will become the first country in the world to restrict the percentage that tech giants like Google and Apple can take in app stores.

Related news
Tim Cook unveils Apple store in Sanlitun
Apple or launch Apple One bundles to boost service income
Apple One？ Is it Apple's own 88 members
Why do I suggest you switch to Apple Music
Hot news this week
"Sheep a sheep" fire, is expected to attract hundreds of millions of financing? But it doesn't have a license...
The first "zero carbon factory" in the ICT industry, Lenovo (Tianjin) Smart Innovation Service Industrial Park is officially put into production
Baidu Ping Xiaoli: The repurchase rate of users on Baidu App reached 60%, and the daily inquiries exceeded 4 million
Billions of euros in investment, Intel Italy chip factory will be located in the Veneto region, sources said
"Sheep a sheep" the whole network burst fire! The founder was the Alma mater system of exhibition card publicity
Huawei Mate50 is on sale: Kunlun glass version is difficult to find, the maximum price increase of the Porsche series
Tencent Music back to Hong Kong behind: online music "internal volume" intensification, short video will become a new growth rate
Intel failed to deliver on its promise: Summer is over and there's still no high-end, flashy desktop graphics cards
Xiaomi Civi 2 Stable Snapdragon 7:23 87mm2 Large-area VC liquid cooling, heat dissipation increased by 200%
"Look at the weather why do I need to renew membership"? Inkblot Weather membership service is a hot topic
The most popular news this week
Huawei Smart Screen portable version released: 10.4-inch 2K screen, 10995mAh battery
The world's first 6GHz frequency Intel high-profile announcement: the lead is indisputable
Do you have the opportunity to take noise -canceling ear to damage the hearing? Experts from the Three Hospital said that
Jump ticket 2 years "pigeon king"! Avx-512 is publicly supported for the first time in the Intel 60 core
I can't afford to live without Musk's help
Mobile phone fast charge new volume king Xiaomi three new machine into the network: the highest 210W?
Secretary -General of the Federation of Federation: Foreign artificial artificial Chinese online red cars have great advantages in China
Do you want to travel to space? Aerospace expert: China already has technical conditions
The strong response to the iPhone 14 Pro Max could widen the gap between the iP15 Pro series
Intel's Arc A7 flagship graphics card debuts in private: Just these two