Washington's suspicion of TIKTOK exacerbated: How will the Bayeon government weigh it?

Phoenix.com Science and Technology News Beijing time on August 17th. Recently, the New York Times published an article to discuss the attitude of the two parties and Biden government around the Chinese application around TIKTOK and other Chinese applications in detail.

Since mid -June, more than 20 US members have called for the Bayeng government to re -ban Tiktok on the grounds of national security. Some members expressed dissatisfaction and frustration about Biden's long -notch Tiktok's review.

The following is a report from the New York Times: 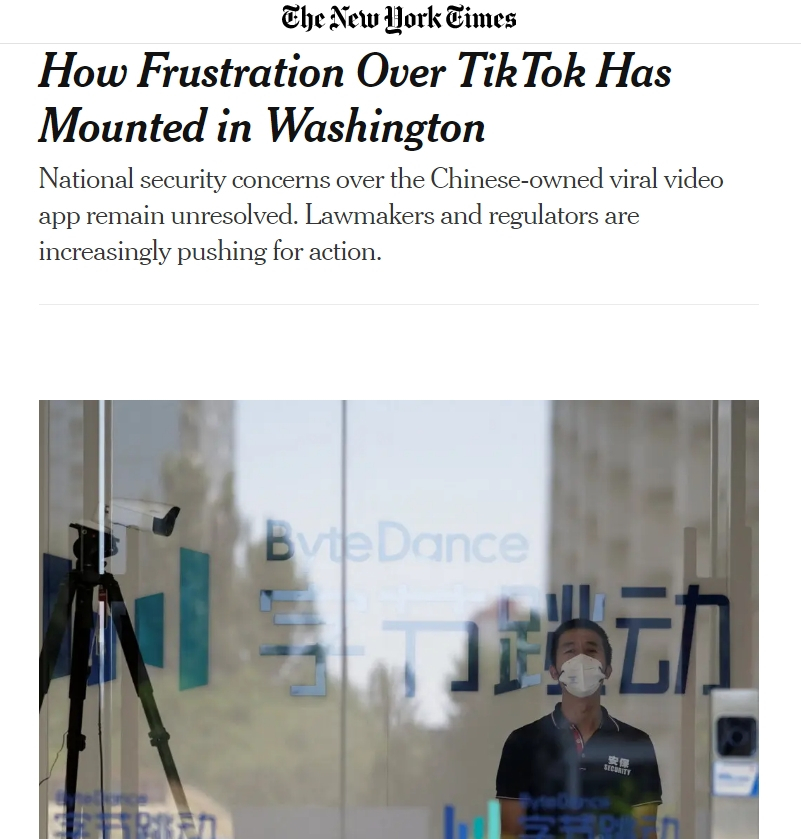 During the conversation, Rubio mentioned a topic: short video product Tiktok threatened US national security. After the meeting, Rubio told the media, "Safety consultant Sha Liven also had the same concerns about TIKTOK."

These private conversations show that concerns about Tiktok have been brewing. Although Tiktok is no longer a political hot topic after Trump steps down, politicians are generally dissatisfied with Biden's investigation of TIKTOK without progress.

This emotion has intensified this year.

On June 17, the technology media BUZZFEED reported that Tiktok may have the problem of transmitting American user data in China, and then caused a large number of media such as the Wall Street Journal and Fox News. For a time, "Tiktok threatened US national security" Enter the public vision.

Through this report, Senator Rubio and Chairman of the American Intelligence Commission Mark & Middot; Mark Warner put pressure on the Federal Trade Commission (FTC) to investigate the bytes of Tiktok and its parent company. The two also called on the Trade Commission to cooperate with the Ministry of Justice to launch an investigation. Another Republican Brendan & Middot; Brendan Carr asked Apple and Google to remove Tiktok from the app store.

Last Tuesday, according to the New York Times, the House of Representatives issued severe warnings that members of Congress could not use Tiktok.

Although politicians kept their voice, the White House had never responded.

"The federal government has not put Tiktok's problem in the priority position, which makes me feel very unfortunate. I hope that with the emergence of new evidence, the government can give more attention." Rubio said.

TIKTOK is becoming more and more popular, and the two parties have become more and more reviewed. According to the latest report of Pew Research Center, 67%of young people from 13 to 17 years old in the United States use Tiktok. Want to play "Chinese cards" to attract votes and unwilling to give up the camp of young people. Politicians began to chase Tiktok. This also made Tiktok's most intense joint resistance in the United States after 2020.

Facing the difficulties of American politicians, Tiktok counterattacked. CEO Zhou's funding publicly described a series of measures for TIKTOK to protect user data, and said that TIKTOK American user data was all stored on Oracle Cloud Server. Politicians' so -called data leaks do not exist.

Another senior executive Michael Beckerman said in an interview with CNN that Tiktok's collection of data from other social applications such as Facebook is "very small". At the same time, he mentioned that TIKTOK will complete the work of American user data storage of the American user data this year, and will delete backup data from Singapore and Virginia.

Although the official statement from Tiktok, politicians did not buy it, they insisted that "tiktok is lying."

Republican Senator Martha & Middot; Marsha Blackburn pointed out that at the 2021 Congress hearing, Tiktok did not explain its relationship with China.

Caldhddot; Karl, who called on Tiktok; Karl said that it was completely appropriate for Tiktok. After he wrote to Apple and Google, a senior executive of Google wrote that Google was paying close attention to the situation and "waiting for the Congress and the Federal Trade Commission to review Tiktok."

For foreign applications, the US Department of Commerce also has the right to review it. However, the review of the Ministry of Commerce is also very slow.

Albright Stonebridge Group, senior vice president of Chinese affairs, Paul Triolo, said: "Some departments of the US government are very frustrated by the lack of Tiktok's lack of progress."

At present, no matter how Tiktok does, Washington's suspicion of it cannot dissipate. When the U.S. House of Representatives warned the members of the members, they said something meaningful: "Tiktok is a Chinese company, and anyone should think of this when anyone uses it."

Related news
Tiktok had another accident in the United States, and Zhang Yiming's globalization ushered in the wake of his dream
Amazon ordered tiktok to be banned for seconds: hand skating?
TikTok America sell Google?
Is it necessary for the United States to kill tiktok?
American youth: saving tiktok
TikTok US employees crowdfunding Sue trump truth! Worry about not getting paid
Man collapses! TikTok behind the siege is the "Chinese son-in-law"
After TikTok shutdown, U.S. users can continue to use
Website of the Central Commission for Discipline Inspection: tiktok endangers national security? The United States did not produce evidence
Washington's suspicion of TIKTOK exacerbated: How will the Bayeon government weigh it?
Hot news this week
According to sources, SoftBank founder Masayoshi Son has not made a proposal to Samsung to invest in Arm
Brother sent a mobile phone to pay 200 yuan to pay the owner to the police: money is not scraped by the wind
China Confinement Association said on the rumor of Haitian soy sauce "dual standard": support enterprise rights protection
Mate 50 Kunlun version is in short supply! Huawei additional production capacity: October supply can improve
Apple iPhone 14 / Pro blessing, optical lens supplier Datu Guang's revenue in September 22 months new high
After a lapse of 28 years, the Chinese women's basketball team won the World Cup runner -up Li Meng's T -shirt on fire
IPhone6 officially "retired", its series sold 250 million units, second-hand purchase price is now as low as 100 yuan......
Apple responds to the iPhone accident monitoring cannot be triggered 100%: no minimum requirements are met
The revenue of Ruiyu, a major network chip manufacturer, was about 2.156 billion yuan in September, down 1.85 percent year on year
Meituan Wang Xing: Chinese auto companies will definitely win, "NIO, Huawei, ideal" will replace BBA to occupy the high-end market
The most popular news this week
Foxconn has announced that it will contract manufacture electric cars and build prototypes for INDIEV in Ohio
Latest ranking: Huawei first, ZTE fourth!
Ding Yun, vice chairman of the Huawei Supervisory Board, died of a sudden illness Huawei: He expressed deep condolences to his unfortunate death
European Union antitrust regulators have questioned Microsoft to see if it can compete fairly after buying Activision Blizzard
Today, I took a set of online signals to compare it ...
Xiaomi 13 series of news summary: a total of 3 model Snapdragon 8 Gen2 blessing
Musk wants to turn Twitter into wechat, but he may struggle to pull it off
Three o'clock before the Apple Officer who can hit the 20 % off. Before buying the machine
When playing games, I interact with my boyfriend too close: the girl after the 1 00 of foreign countries will hurt her sister
Wolf on mobile? Chinese copycat "The Phantom Wolf: Darkest Hour" hits shelves