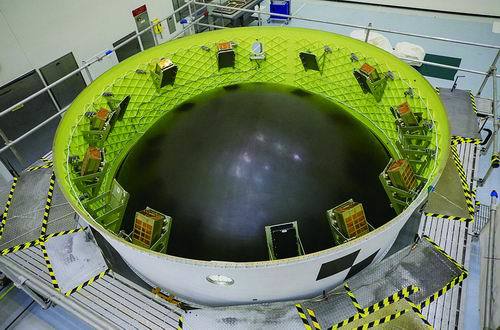 Report from our correspondentAt the end of August, NASA's most powerful launch vehicle ever, the Space Launch System (SLS), will make its first test flight. The 98-meter-tall rocket will embark on a 42-day trip to the moon and back, carrying three "astronauts" -- three mannequins equipped with instruments.

The SLS is part of NASA's lunar landing program Artemis, which is expected to send astronauts to the moon as early as 2025, according to Science. While no human beings were aboard the SLS when it launched on August 29, it was accompanied by 10 Cubesats. Each satellite is about the size of a briefcase and can be used to probe the moon (several Cubesats will focus on lunar ice), asteroids and the deep space radiation environment.

As the launch nears, satellite-makers are worried that half of the satellites may not have enough power to power up their mission. The satellites, which have been stuck inside rockets for more than a year due to launch delays, are running out of battery power, and some cannot even start and deploy their solar panels, so they cannot be recharged.

"The longer you wait, the greater the risk." "Said Ben Malphrus of Morehead State University, principal investigator of the Lunar Observation Satellite, one of 10 Cubesats.

The 10 cubesats will be used to monitor satellite and rocket separations, study the effects of radiation on yeast, solar wind and magnetic fields, lunar ice, as well as imaging the Earth's plasma layer, testing a new infrared spectrometer, testing plasma thrusters, landing a miniature lander on the lunar surface, and flying to an asteroid using a solar sail. Of these, the batteries of five Cubesats cannot be recharged without being removed from the rocket. NASA engineers worry that charging the satellite's batteries inside the rocket could trigger an electrical discharge that could damage the rest of the rocket.

For example, a Cubesat called LunaH Map may have a 50 percent battery reserve, posing a major threat to successful mission completion because when battery power drops to 40 percent, the Cubesat won't be able to complete a series of initial operations and starts, and it won't be able to recharge without opening its solar panels.(Xu Rui)

Related news
Deep net|Successful launch of the thousand-day one. How far is China's commercial space flight from Space X?
Space X delayed the launch of 60 satellite chains again due to hardware problems
Google launches kids space app and video center for children's tablets
In five years, can we really wait for China's space X?
China’s First Desktop Operating System Developer Platform openKylin Launched
Hot news this week
According to sources, SoftBank founder Masayoshi Son has not made a proposal to Samsung to invest in Arm
Brother sent a mobile phone to pay 200 yuan to pay the owner to the police: money is not scraped by the wind
Mate 50 Kunlun version is in short supply! Huawei additional production capacity: October supply can improve
After a lapse of 28 years, the Chinese women's basketball team won the World Cup runner -up Li Meng's T -shirt on fire
China Confinement Association said on the rumor of Haitian soy sauce "dual standard": support enterprise rights protection
IPhone6 officially "retired", its series sold 250 million units, second-hand purchase price is now as low as 100 yuan......
Apple iPhone 14 / Pro blessing, optical lens supplier Datu Guang's revenue in September 22 months new high
Apple responds to the iPhone accident monitoring cannot be triggered 100%: no minimum requirements are met
Meituan Wang Xing: Chinese auto companies will definitely win, "NIO, Huawei, ideal" will replace BBA to occupy the high-end market
The revenue of Ruiyu, a major network chip manufacturer, was about 2.156 billion yuan in September, down 1.85 percent year on year
The most popular news this week
European Union antitrust regulators have questioned Microsoft to see if it can compete fairly after buying Activision Blizzard
Today, I took a set of online signals to compare it ...
Xiaomi 13 series of news summary: a total of 3 model Snapdragon 8 Gen2 blessing
Musk wants to turn Twitter into wechat, but he may struggle to pull it off
Three o'clock before the Apple Officer who can hit the 20 % off. Before buying the machine
When playing games, I interact with my boyfriend too close: the girl after the 1 00 of foreign countries will hurt her sister
Wolf on mobile? Chinese copycat "The Phantom Wolf: Darkest Hour" hits shelves
The era of bangs may be over! Apple's iPhone 15 series is a collective change
Domestic prestige! The storage chip collapses thoroughly!
China University of Science and Technology discovered that the existence of Phosphorus in Titan can provide potential extraterrestrial life