Amazon requires US regulators to withdraw votes: bypassing the company's harassment of Bezos to disturb operations

The boss was issued a civil ticket, Amazon couldn't sit still, and submitted the document to accuse the US Federal Trade Commission.

Amazon submitted a petition document to the FTC on August 5, accusing FTC withdrawing from the company's legal adviser, and issuing a Civil Investigative Demand to about 20 executives. Withdrawing the subpoena. 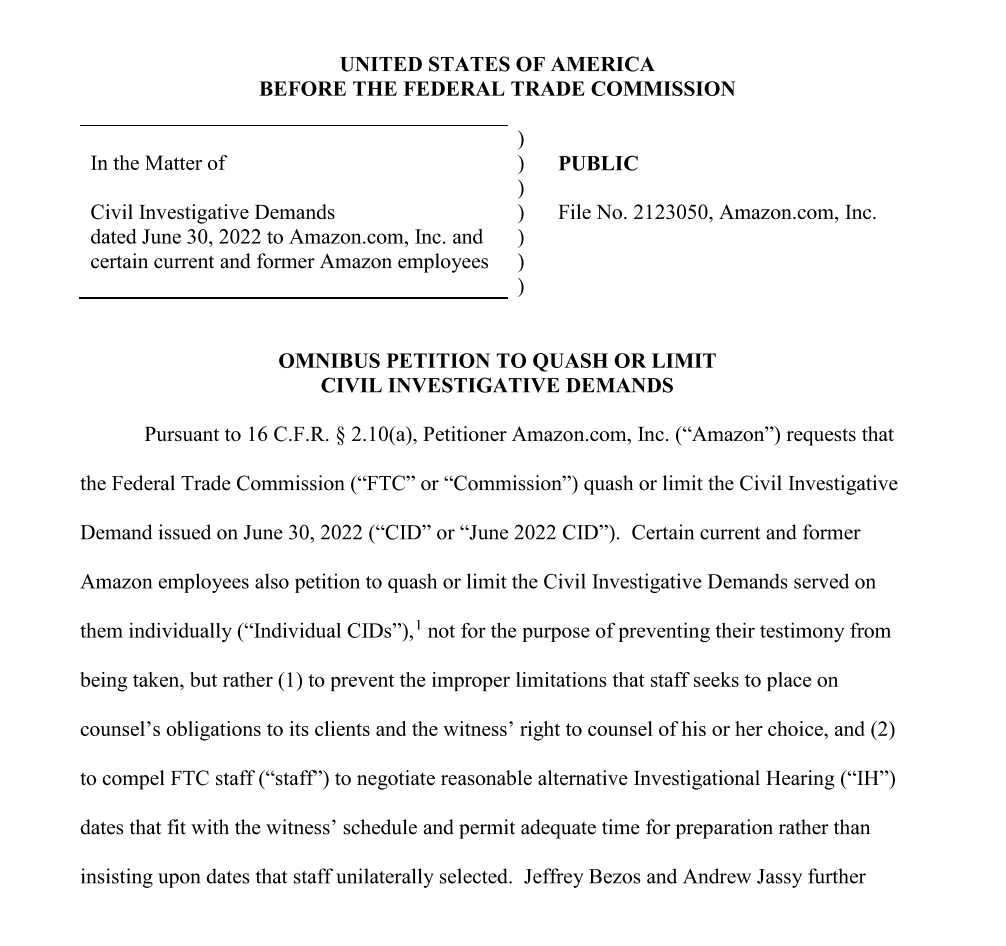 The petition documents show that since March 2021, FTC has been investigating Amazon Prime. The document states that FTC believes that there is a problem with the registration and cancellation mechanism of Prime. It is suspected that Amazon uses the interface design to guide and manipulates the user registration of Prime. It deliberately cancels the cumbersome process of subscription to retain users.

According to the US media Insider in March, the Amazon spokesman denied the above question and said that the registration and cancellation of the subscription interface of Prime "simply show the meaning of each option to users."

Amazon said that the company has always cooperated with the FTC survey to produce and submit about 37,000 pages of file materials. However, the survey has been inexplicably stagnant for 6 months. Until April this year, FTC suddenly announced that the new lawyer would take over the case and began to "crazy pressure" and asked for an investigation before this fall.

Amazon said that after the investigation was restarted, FTC not only asked the company to provide more documents and evidence, but also expanded the scope of the investigation. In addition to Amazon Prime, five subscription services such as Audible, Amazon Music, Kindle Unlimited, Subscribe & AMP; SAVE have also been included in the investigation list by FTC.

In addition, in June of this year, FTC also sent about 20 civil investigations similar to the votes to the executives of about 20 or resigns. The founder of the company, Boss, the current CEO Andy & Middot; Jiaxi and the former consumer director Diff & Middot; Dave Clark were all involved.

Amazon accused the FTC bypassed the company's legal adviser, sent the voucher directly to the relevant personnel's homes, and prohibited the above -mentioned personnel from contacting the lawyer. "This kind of behavior is not feasible and unfair. The company has always cooperated with the investigation and provided sufficient evidence and materials. There is no reason to conduct investigations to the high -level investigation and ask them to provide information."

Amazon emphasized that FTC's behavior harassed the company's highest -level executives and disturbed business operations. It said in a petition that he hoped that FTC would withdraw these subpoena.

According to the FTC regulations, the company can raise objections to the investigation, and the FTC will respond within 40 days. Amazon hopes that FTC can extend the response time to September 15.

It is worth noting that during the investigation of this case, the FTC's leadership changed. In June 2021, the youngest chairman in history, 32 -year -old Lina & Middot; Linakhan.

Lina & Middot; Khan has repeatedly criticized the science and technology giants many times. In 2017, he published an article "Yale Law Journal" "Amazon 'S Antitrust Paradox" and advocated rethinking the antitrust law enforcement of the digital market. The article caused a huge response, Lina & Middot; Khan also made a standpoint and became one of the leaders of the antitrust movement. 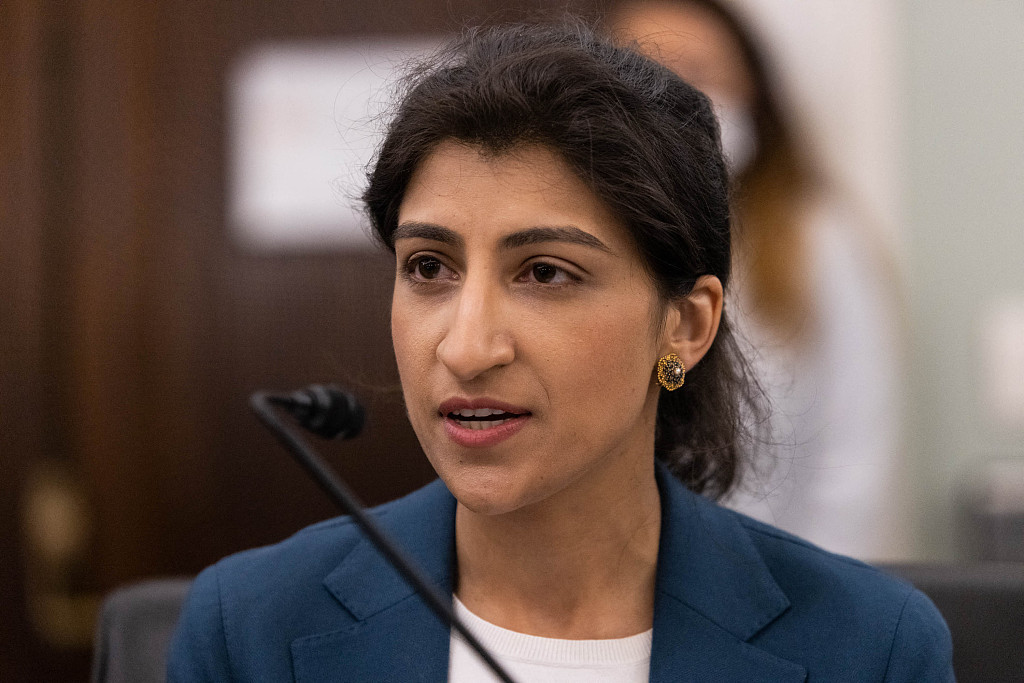 Lina Khan, an anti -monopoly expert and associate professor at the University of Columbia University Law School, focuses on the antitrust field, and has become more aggressive under its leadership in its leadership. American consumer news and business channel CNBC said Lina & Middot; FTC under the leadership of Khan is very "tricky" for Amazon.

Related news
Musk came to China to dig a tunnel? Plan to launch the Boring Company China project
Tesla will build 12 seat tunnel electric bus for boring company
Alibaba Forms Smart Service Company Lingyang
Hot news this week
According to sources, SoftBank founder Masayoshi Son has not made a proposal to Samsung to invest in Arm
Brother sent a mobile phone to pay 200 yuan to pay the owner to the police: money is not scraped by the wind
Mate 50 Kunlun version is in short supply! Huawei additional production capacity: October supply can improve
After a lapse of 28 years, the Chinese women's basketball team won the World Cup runner -up Li Meng's T -shirt on fire
China Confinement Association said on the rumor of Haitian soy sauce "dual standard": support enterprise rights protection
IPhone6 officially "retired", its series sold 250 million units, second-hand purchase price is now as low as 100 yuan......
Apple iPhone 14 / Pro blessing, optical lens supplier Datu Guang's revenue in September 22 months new high
Apple responds to the iPhone accident monitoring cannot be triggered 100%: no minimum requirements are met
Meituan Wang Xing: Chinese auto companies will definitely win, "NIO, Huawei, ideal" will replace BBA to occupy the high-end market
Tencent Holdings was short HK $580 million, up 100.89% from the previous day. The company closed 5.76% higher today
The most popular news this week
Foxconn has announced that it will contract manufacture electric cars and build prototypes for INDIEV in Ohio
Latest ranking: Huawei first, ZTE fourth!
Ding Yun, vice chairman of the Huawei Supervisory Board, died of a sudden illness Huawei: He expressed deep condolences to his unfortunate death
European Union antitrust regulators have questioned Microsoft to see if it can compete fairly after buying Activision Blizzard
Today, I took a set of online signals to compare it ...
Xiaomi 13 series of news summary: a total of 3 model Snapdragon 8 Gen2 blessing
Musk wants to turn Twitter into wechat, but he may struggle to pull it off
Three o'clock before the Apple Officer who can hit the 20 % off. Before buying the machine
When playing games, I interact with my boyfriend too close: the girl after the 1 00 of foreign countries will hurt her sister
Wolf on mobile? Chinese copycat "The Phantom Wolf: Darkest Hour" hits shelves