Samsung has made waves by mocking the iPhone 14 for its lack of innovation: it once teased Apple for not giving away a charger

As one of Apple's main rivals, Samsung has been in a never-ending battle with Apple, mocking Apple for not having any innovation or new features in an AD.

Samsung says in its ads for the Galaxy S22 Ultra and Z Flip4:“ High pixels and moon mode won't be coming to an iPhone near you, but they've been around for a long time on Samsung Galaxy phones. ”

After the news was reported by the media, the hashtag # samsungtaunts the lack of innovation in apple's iPhone14 and is trending on weibo.

It is worth mentioning that Samsung started a similar operation as early as the iPhone 12 series, when the iPhone 12's non-standard charger became the focus of the industry.

Samsung says your Galaxy flagship has everything you need,Everything from the most basic charger to the best camera, battery, performance, memory and even a 120Hz screen. 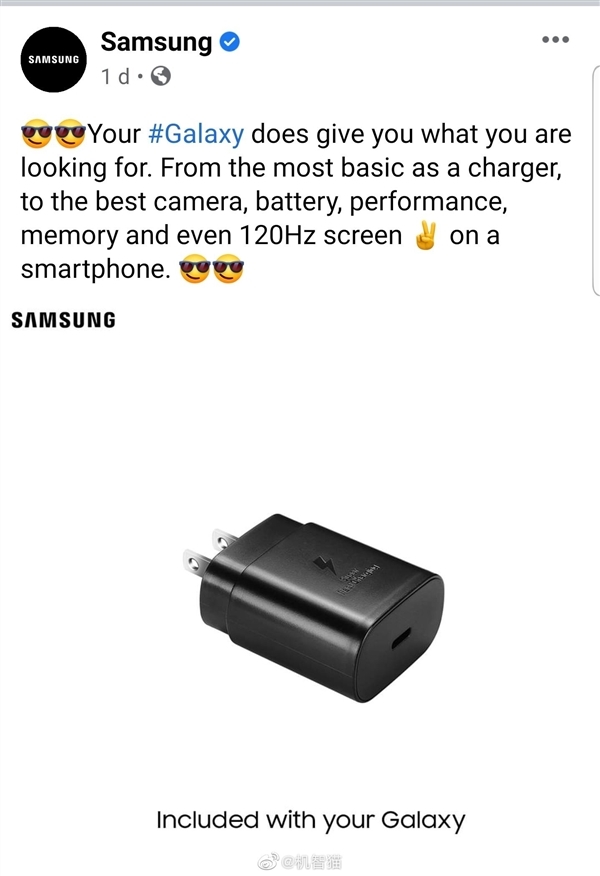 Samsung's case, illustrated with a Samsung Quick charger, insinuates that the iPhone 12 doesn't come with a standard charger.

And even more interesting,In the S21+ and S21 Ultra, Samsung only provides cables, and chargers need to be purchased separately.While S21 continues to deliver chargers (25W), the whole department will no longer give headphones.

Before that, Samsung also quietly deleted a tweet that implied Apple would not send the charger.

Samsung reportedly mocked the iPhone X's bangs and the removal of the 3.5mm headphone jack.

Related news
Maybe next year you'll get an iPhone 12 labeled "made in India."
What are the highlights and slots of "unlocking iPhone through apple watch"?
Some iPhone 13/Pro "failure" does not support the Apple Watch unlock screen
Hot news this week
A small plane in the US has crashed into a 30-metre high voltage power line and got stuck: 80,000 people affected
Can recording others' wechat chat records be used as evidence? The Beijing Internet Court has an answer
Alibaba launched a new cross-border e-commerce platform in Spain, aiming to operate independently in the middle and high-end market
It's not just Huawei! Beidou has penetrated more than 20 industries and applied more than 15.5 million products
When pure water is used in China team to solve the problem of seawater hydrogen production: it is expected to become an original industry
A Tesla crashed into two cars in Taizhou, Zhejiang province, killing two and injuring one, police said
The appearance of Xiaomi's mini console is revealed for the first time: an all-metal body with a strong apple smell
Breaking the spell of "Android 3 year must card", the new Breguet mobile phone will be sold for the first time tomorrow: from RMB3499
Be careful with your phone for a long time! The aunt played with her mobile phone so much that her fingers got stuck
Google's Project Zero team accuses vendors of slacking after ARM GPU bug exposes Android upgrade woes
The most popular news this week
Why is the Apple Pencil 2 not supported? iFixit takes apart the iPad 10 to find out
Zte's experience proves that there is no way out of appeasement and peace can only be fought out
China's growing presence in the global high-tech sector is unacceptable to the US
Us to investigate Lapsus$hack, Microsoft, Nvidia and others were breached
From January to October this year, the number of global travel app downloads approached 2 billion, with China's Amap, Baidu Map and Railway 12306 taking the top three places
With the acquisition of Pulse, Mozilla will develop a new approach to machine learning
Did the United States achieve its goal? More than 40 suppliers went to the United States with TSMC
Microsoft may not be able to offer its Microsoft 365 service in German schools after two years of efforts failed
A record $50 million in compensation! In the final judgment of the dispute over the infringement of Minecraft by Mini-World, NetEase won the lawsuit
Manufacturers like Samsung and Xiaomi have been affected. Google has revealed a dangerous flaw that threatens millions of Android devices