On September 16, Weibo announced that it has become the exclusive new media partner of LIV Golf Invitation Series, and Sina Golf will broadcast all events of this season. By cooperating with the copyright of the first event and creating the operation model of "live streaming + e-commerce", Sina Golf will further strengthen its leading position in the industry and promote the popularity of the event in the Chinese market.

The LIV Invitational has attracted a lot of attention since its inception with its huge prize money and a host of star players. Sina Golf streamed its first three games of the season live on media platforms such as Weibo, Sina.com and wechat video account, averaging more than 100,000 viewers a game despite the time difference that caused some games to be broadcast in the middle of the night in China. A large number of fans participated in the discussion of the event content on the Weibo platform.

The LIV Golf Invitational is largely backed by Saudi Arabia's sovereign Fund, the Public Investment Fund, and has legendary star Greg Norman as its CEO. The inaugural race was held in London, UK in June 2022, with eight races planned throughout the year, with a single-stop prize money of $25 million and a total annual prize money of $255 million.

The next race will be held in Chicago from September 17 to 19. In addition to the current world No. 3 and 2022 British Open winner Cameron Smith and PGA Tour winner Joaquin Niemann, Former world No. 1 Dustin Johnson, "golf scientist" Bryson DeChambeau and legendary star Phil Mickelson will all play. 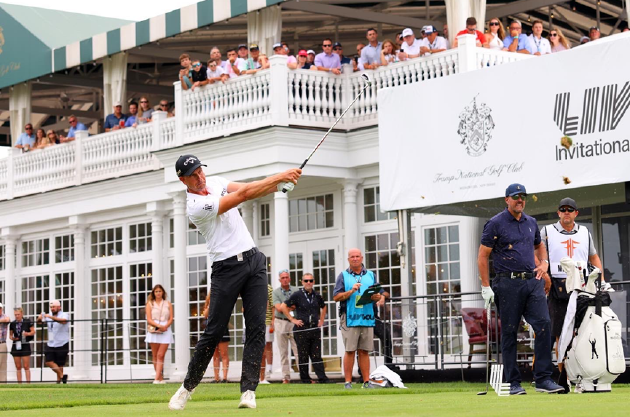 With over 3 million users, Sina broadcasts thousands of hours of golf events every year

Founded in 2002, Sina.com Golf Channel is the most authoritative professional golf media platform in Chinese, tracking the weekly PGA Tour, European Tour, Asian Tour, LPGA Tour and other international events. It is the official partner of professional and amateur events in China. New Golf has built a complete communication channel including portal, Weibo, wechat public account and video account, covering nearly 3 million golf users in the whole network, and the average daily traffic of information content leads the industry.

Take the DP World Tour, which has been broadcast live for five consecutive years, as an example, Sina Golf has broadcast more than 1,000 hours a year, with more than 300,000 people watching a single event. Not only that, in the process of copyright operation, Sina Golf has gradually mined the revenue transformation mode of "live streaming + e-commerce", and the annual e-commerce GMV based on DP World Tour has exceeded 30 million yuan. HONMA, FILA, Macallan, Samsung and other brand owners have successively launched content marketing cooperation with Sina Golf to expand brand exposure around the event and generate brand influence in the golf fan community.

In addition to the online operation of the event copyright, Sina Golf also built a series of its own IP events. Since 2020, the "Sina Cup Professional and Amateur Tournament" has become the IP of the domestic head golf team event, attracting not only professional stars but also pan-interested fans. Led by Feng Shanshan and Liang Wenchong, a single event featuring crossover stars Ren Dahua and Shi Xiaolong has been read more than 500 million times on Weibo.

Based on the social media platform of Weibo, Sina Golf has formed a three-dimensional golf ecological community such as "event IP+ live content + vertical e-commerce + industry list". Weibo data show that in addition to the high stickiness of users in first-tier cities such as Beijing, Shanghai, Guangzhou and Shenzhen, golf is also gradually exploring emerging markets, and user content and consumer demand are increasing year by year. In the past few years, top golfers such as Li Haotong, Wu Ashun and Lin Xiyu have frequently shared their personal updates on Weibo, and the atmosphere of discussion has become increasingly intense.

Weibo will help LIV Invitational get a cold start on Chinese social media platforms. According to the relevant person in charge, the cooperation between the two sides is expected to achieve cross-border linkage from multiple dimensions, including relying on massive copyright content such as live broadcast of matches and distribution of wonderful short videos to gather sound volume, as well as through well-known soccer stars, soccer commentary guests, professional managers and other vertical industry authorities to guide the audience's attention, and form a greater influence. And through the commercial cooperation mode of single event to achieve commercial income.

As the tournament unfolds, the LIV series of events is becoming the focus of discussion among golf interested users on the Weibo platform, with the release of local original content, especially the new mode of four-person teams competing for points and prize money in the form of individual and team. More than that, more than 100 golf players have published original content related to the event on the Weibo platform, popularizing the knowledge of the event for users, thus promoting the attention of pan-sports users.

In the past few years, with the enrichment and development of related supporting industries, golf and its industry have entered a new stage of development in the Chinese market. After 2017, the golf industry has gradually become popular and young. Many sports and fashion brands are also actively expanding golf categories, and the track prosperity is improved. Golf has become a new trend in the wake of the pandemic, with industry insiders pointing to a surge in participation in many parts of the world, especially as outdoor sports become safer to play.

Not only that, but the sport has become more popular among young people, with a lot of content about golf being generated on social media. Given that more than 75 percent of Weibo's active users are Gen Z users, golf is expected to attract the attention of this group of users through more event coverage and better shots, and the next generation of golfers is expected to emerge from these young users, officials said. Indeed, the proliferation of teenage players has made them an important driver of golf's popularity in addition to high-net-worth middle-aged users.

As the leading social media platform in China, Weibo will demonstrate the great value of the head social media platform in sports event IP incubation with its complete industrial chain coverage and 582 million monthly active users, which will help LIV Golf Invitational to build social assets and further enhance brand influence in the Chinese market." The habit of checking Weibo will also continue at the new event.

Related news
Sina.com Stopped updating Sina response: company confidential
Weibo became the exclusive partner of LIV new media Sina Golf to create a complete three-dimensional ecology
Hot news this week
According to sources, SoftBank founder Masayoshi Son has not made a proposal to Samsung to invest in Arm
Brother sent a mobile phone to pay 200 yuan to pay the owner to the police: money is not scraped by the wind
Mate 50 Kunlun version is in short supply! Huawei additional production capacity: October supply can improve
After a lapse of 28 years, the Chinese women's basketball team won the World Cup runner -up Li Meng's T -shirt on fire
IPhone6 officially "retired", its series sold 250 million units, second-hand purchase price is now as low as 100 yuan......
China Confinement Association said on the rumor of Haitian soy sauce "dual standard": support enterprise rights protection
Apple responds to the iPhone accident monitoring cannot be triggered 100%: no minimum requirements are met
Meituan Wang Xing: Chinese auto companies will definitely win, "NIO, Huawei, ideal" will replace BBA to occupy the high-end market
Apple iPhone 14 / Pro blessing, optical lens supplier Datu Guang's revenue in September 22 months new high
Haitian Weiye issued a statement to deny the "dual standard": Do not affect the reputation of China's world -made world!
The most popular news this week
European Union antitrust regulators have questioned Microsoft to see if it can compete fairly after buying Activision Blizzard
Today, I took a set of online signals to compare it ...
Xiaomi 13 series of news summary: a total of 3 model Snapdragon 8 Gen2 blessing
Musk wants to turn Twitter into wechat, but he may struggle to pull it off
Three o'clock before the Apple Officer who can hit the 20 % off. Before buying the machine
When playing games, I interact with my boyfriend too close: the girl after the 1 00 of foreign countries will hurt her sister
Wolf on mobile? Chinese copycat "The Phantom Wolf: Darkest Hour" hits shelves
The era of bangs may be over! Apple's iPhone 15 series is a collective change
Domestic prestige! The storage chip collapses thoroughly!
China University of Science and Technology discovered that the existence of Phosphorus in Titan can provide potential extraterrestrial life