Beauty is not like words! Weber telescope shoots the clearest Neptune in history

News on September 22, the National Aeronautics and Space Agency (NASA) recently released the Neptune photo taken by the Weber Space Telescope,This picture is the clearest photo of the Neptune in the past few decades. 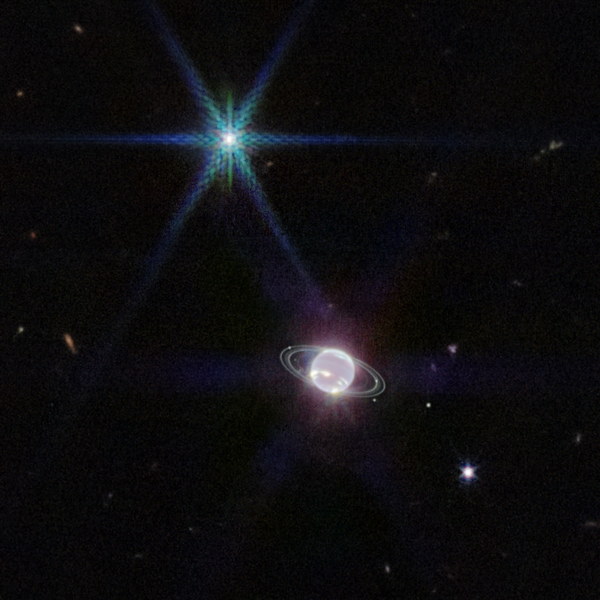 This photo clearly presents multiple aura of Neptune.In addition to a few bright and narrow rings, there are also dull dust rings in the inside.

in addition,The place where Neptune is close to the Arctic is very bright, and there are cloud groups and cloud belts with higher altitude. It is reported that the main components of these ice clouds are methaneThey can reflect them back to space before the methane gas absorbs sunlight, just like putting a ray of gauze for Neptune. 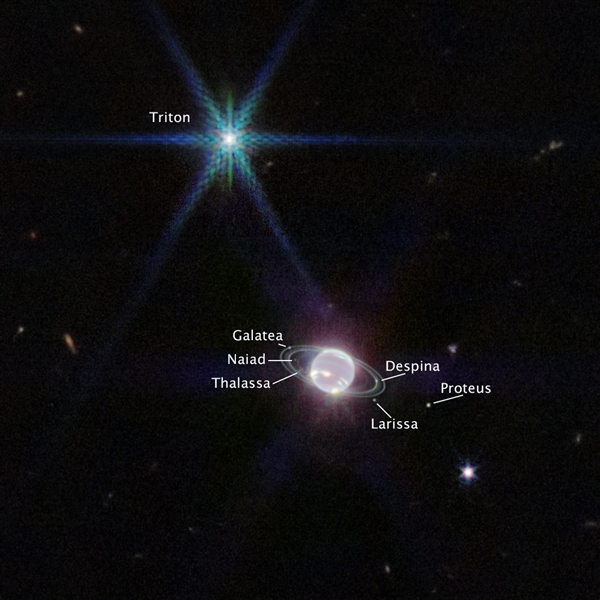 Scientists have studied Neptune from 1846. It is a planet of the outer solar system. It is very far away from the sun. It is 30 times the distance from the sun. Looking at the sun from Neptune, it is small and blurred, just like the dim greenery seen on the earth.

The photo also shows 7 of the 14 Neptune satellites. The brightest is Triton. It is located on the top left of the photo with a star with a star. Because the surface is covered with nitrogen ice, the reflectance is as high as 70%. 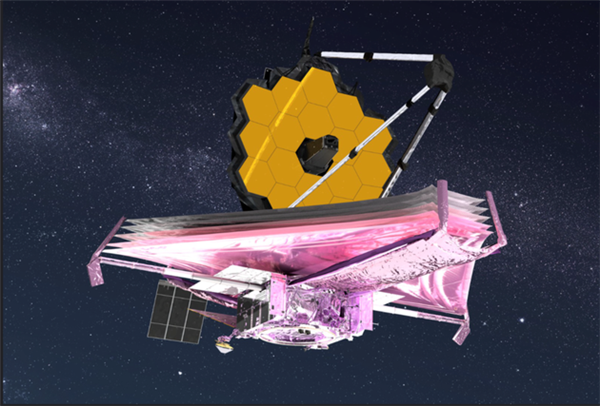 Related news
NASA scientists detect mysterious objects between the Earth and Neptune
Time Shuttle:Experience Windows Nettune operating system(video)cancelled by Microsoft.
Us 17-year-old high school student NASA internship day 3 discovery of extraterrestrial planets: want to go to Princeton University in the future
NASA thinking about returning to Neptune
The update of windows 10 results in the paralysis of file history of some users (Figure)
James Weber Space Telescope has been hit by six microbes.
Beauty is not like words! Weber telescope shoots the clearest Neptune in history
Hot news this week
According to sources, SoftBank founder Masayoshi Son has not made a proposal to Samsung to invest in Arm
Brother sent a mobile phone to pay 200 yuan to pay the owner to the police: money is not scraped by the wind
Mate 50 Kunlun version is in short supply! Huawei additional production capacity: October supply can improve
After a lapse of 28 years, the Chinese women's basketball team won the World Cup runner -up Li Meng's T -shirt on fire
China Confinement Association said on the rumor of Haitian soy sauce "dual standard": support enterprise rights protection
IPhone6 officially "retired", its series sold 250 million units, second-hand purchase price is now as low as 100 yuan......
Apple iPhone 14 / Pro blessing, optical lens supplier Datu Guang's revenue in September 22 months new high
Apple responds to the iPhone accident monitoring cannot be triggered 100%: no minimum requirements are met
Meituan Wang Xing: Chinese auto companies will definitely win, "NIO, Huawei, ideal" will replace BBA to occupy the high-end market
The revenue of Ruiyu, a major network chip manufacturer, was about 2.156 billion yuan in September, down 1.85 percent year on year
The most popular news this week
European Union antitrust regulators have questioned Microsoft to see if it can compete fairly after buying Activision Blizzard
Today, I took a set of online signals to compare it ...
Xiaomi 13 series of news summary: a total of 3 model Snapdragon 8 Gen2 blessing
Musk wants to turn Twitter into wechat, but he may struggle to pull it off
Three o'clock before the Apple Officer who can hit the 20 % off. Before buying the machine
When playing games, I interact with my boyfriend too close: the girl after the 1 00 of foreign countries will hurt her sister
Wolf on mobile? Chinese copycat "The Phantom Wolf: Darkest Hour" hits shelves
The era of bangs may be over! Apple's iPhone 15 series is a collective change
Domestic prestige! The storage chip collapses thoroughly!
China University of Science and Technology discovered that the existence of Phosphorus in Titan can provide potential extraterrestrial life