The lingering plagiarism controversy "a sheep with a sheep" has also become a "victim". On September 22, a reporter from Beijing Commercial Daily found that the Apple App Store had nearly 10 "Sheeps" high imitation games within two days. Taking the "Sheep and Sheep" as an example, its pages and gameplay design, props and difficulties are extremely similar to "Sheep". According to incomplete statistics, there are 9 APPs with similar names in the Apple App Store, and many of them have recently renamed their enthusiasm.

The originality of "Sheep's Sheep" itself was also questioned, and a general statement was to plagiarize "3Tiles". Interestingly, after the fire was burst into fire, "3Tiles", which was launched for two years, also ushered in a high time. It has ranked first in the free entertainment list of Apple App Store for several days. Looking around the game industry, plagiarism has never been stopped, including but not limited to "Wolong Legend: Biography of the Three Kingdoms" vs "Hearthstone Legend: Warcraft Heroes", "Shenwu" vs "Fantasy Westward Journey 2", etc. are all typical cases. 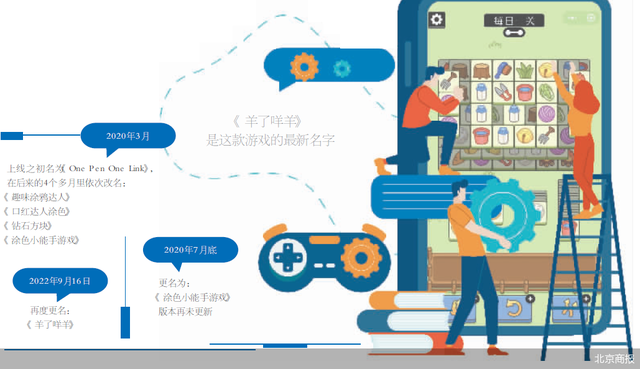 "Imitation version" changing the name to the popularity

The same red bucket, blue gloves, semi -wood stakes, Chinese cabbage and flames also provide three props. If the game name "Sheep and Sheep" is ignored, users can easily mistakenly think that this is the official of "Sheep" App. It is such a game APP on September 22 on the Apple App Store Free Game-Leisure List First, Free Game-Puzzle List No. 1, Free Game List No. 1. Prior to this, "Sheep's Sheep" had no name on various lists, and had not upgraded the version for two years.

According to the Apple App Store information, "Sheep's Sheep" is the latest name of this game. The first name was "One Pen One Link" in March 2020. It was renamed in order in more than 4 months later: "Fun graffiti "Lipstick", "Lipstick Tale", "Diamond Block", "Color Phantom Small Explorer Game", and renamed "Color Paramoral Games" at the end of July 2020, the version has not been updated until September 16, 2022 Rename again: "Sheep and Sheep".

After changing the new name, the fate of this game is ups and downs. According to Qimai data information, from September 16th, "Sheep's Sheep" has undergone three removed and twice, and the last time has occurred at 23:39 on September 21.

For such applications, "Sheep's Sheep" has long understood. "We have been attacked these days, because many pirated games have been launched, they want to attack us, and they have shot this wave of popularity ourselves." Zhang Jiaxu, the founder of "Sheep" developer Jianyou Technology, said.

However, not every "Sheep's Sheep" high imitation version has reached the heat. According to Qimai data information, there are currently a number of similar products of "Sheep", and some of them are re -launched, and the other part is still in a state.

Unlike the high imitation version, "3Tiles" that eliminates the game of "3tiles" is a ride. As of the press release of Beijing Commercial Daily, "3Tiles" is ranked fifth in the free entertainment list of Apple App Store, at 14:00 on September 14th to 8th At that time, "3Tiles" ranks first in the above -mentioned unit, pushing forward for a month, and "3Tiles" ranked out of the hundred. From the perspective of download, the estimation of Qimai data. In the past 3 months, the average download volume of "3tiles" is less than 30,000, and the download volume of "3tiles" in the past 7 days is 295,000.

The reason why "3tiles" is the popularity of "3Tiles" because of his opinion that "Sheep" is plagiarized.

The Beijing Commercial Daily reporter found that the art design of "3Tiles" is obviously different from "Sheep". The difficulty is less than "Sheep with a Sheep", but there is advertising in the gap between the pass. If the user wants to enter the advertising mode, You can choose an internal purchase project to remove the advertisement.

When it comes to the differences between the two games, the analyst of the cultural consumer industry, Ma Axin, bluntly said, "The gameplay of connecting elimination has always been widespread in the game, so the gameplay does not involve the so -called infringement. At present, more attention to game content infringement is like changing skin, that is, the height of the style and expression techniques, which is also the reason for the plagiarism evaluation of the game "Sheep" game. "

It is not difficult to defend the rights of the game

"Plagiarism is generally similar to the high level of screens and gameplay. It is currently more common in the industry." Fu Zhijiu CEO Sun Hui, who has many years of game development experience, told Beijing Business Daily reporter.

Standing at the legal level, how does plagiarism between game products be defined? Wang Ping, a lawyer at the Shanghai Branch of Beijing Longan Law Firm, explained to a reporter from Beijing Business Daily, "For plagiarism of game materials, such as character characters, game scenes, etc., most of them are based on infringement of copyrights. People often modify or adjust the materials, but as long as these materials are identified as the same or substantial as a whole, they will be identified as a copyright infringement. "

Ma Axin also emphasized that gameplay is the core of game innovation. "The gameplay is fundamentally difficult to innovate from the current gameplay. More game companies choose to create a compound game experience through the combination of gameplay, which also realizes changes and further opened the market. Content is innovation. Innovation is innovation. Extension, including but not limited to game plots, character settings, and update of subsequent DLC (available download content). Content innovation is the key to the current game realization advantage. "

Related news
HOW I GOT MY EX BACK WITH THE SPELL OF DR EROMOSE THE GREAT
I NEED MY EX BACK WITH THE HELP OF A LOVE SPELL CASTER URGEN
Hot news this week
According to sources, SoftBank founder Masayoshi Son has not made a proposal to Samsung to invest in Arm
Brother sent a mobile phone to pay 200 yuan to pay the owner to the police: money is not scraped by the wind
China Confinement Association said on the rumor of Haitian soy sauce "dual standard": support enterprise rights protection
Mate 50 Kunlun version is in short supply! Huawei additional production capacity: October supply can improve
Apple iPhone 14 / Pro blessing, optical lens supplier Datu Guang's revenue in September 22 months new high
After a lapse of 28 years, the Chinese women's basketball team won the World Cup runner -up Li Meng's T -shirt on fire
IPhone6 officially "retired", its series sold 250 million units, second-hand purchase price is now as low as 100 yuan......
Apple responds to the iPhone accident monitoring cannot be triggered 100%: no minimum requirements are met
The revenue of Ruiyu, a major network chip manufacturer, was about 2.156 billion yuan in September, down 1.85 percent year on year
Meituan Wang Xing: Chinese auto companies will definitely win, "NIO, Huawei, ideal" will replace BBA to occupy the high-end market
The most popular news this week
Foxconn has announced that it will contract manufacture electric cars and build prototypes for INDIEV in Ohio
Latest ranking: Huawei first, ZTE fourth!
Ding Yun, vice chairman of the Huawei Supervisory Board, died of a sudden illness Huawei: He expressed deep condolences to his unfortunate death
European Union antitrust regulators have questioned Microsoft to see if it can compete fairly after buying Activision Blizzard
Today, I took a set of online signals to compare it ...
Xiaomi 13 series of news summary: a total of 3 model Snapdragon 8 Gen2 blessing
Musk wants to turn Twitter into wechat, but he may struggle to pull it off
Three o'clock before the Apple Officer who can hit the 20 % off. Before buying the machine
When playing games, I interact with my boyfriend too close: the girl after the 1 00 of foreign countries will hurt her sister
Wolf on mobile? Chinese copycat "The Phantom Wolf: Darkest Hour" hits shelves