On September 23, Weibo announced that it had reached a strategic partnership with the Chinese Football Association's Super League (CSL). According to the agreement, Weibo will become the official social media platform of CSL. The two parties will jointly build around the IP of CSL, promote the further precipitation of the IP social assets, and enlarge the copyright value. Meanwhile, fans will be able to watch the post-match press conference and abundant innovation and innovation content through Weibo, and interact with clubs and players online.

The resumption of the 2022 season home and away Chinese Super League competition is becoming increasingly white-hot. The 18-team season stretches from early June to mid-November. As the highest professional football league in the Chinese mainland, the CSL started in 2004 as the former China League A, which was established in 1989. Despite the impact of the epidemic in the past few years, the Chinese Super League has been the first to resume matches as the prevention and control of the epidemic has entered a normal stage, which has promoted the recovery of the domestic sports industry. The cooperation with Weibo will help CSL combine offline matches with online interaction and further expand IP value.

Based on the cooperation between the two sides, during the match, CSL will share the match video highlights and various statistical results of a single match through its official account on Weibo, guide users to participate in the single best player vote, and broadcast the post-match conference on Weibo. In addition, CSL operators will promote interaction between CSL clubs and users on Weibo, create benchmarks for popular players, and set a healthy and positive role model for Chinese football by running content around the game and the players themselves. So far, 18 Chinese Super League clubs have settled in, and more than half of the current players have opened Weibo accounts. 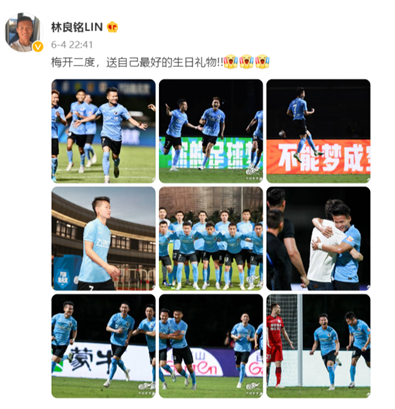 After a series of football events such as the European Championship, the Copa America and the World Cup, as well as comprehensive sports events such as the Olympic Games and the National Games, Weibo not only provides a social platform for users to observe, participate in and discuss major sports events, but also provides a social space for a wide range of sports fans to communicate and share daily. Weibo users can not only participate in the tournament discussion through various forms such as text, text and video, but also further realize the cross-screen communication under hot spots through Weibo information flow, chat community, live streaming, live discussion and hot chat, as clubs and players move in.

Since the start of the 2022 season, Weibo has invited big footballers such as Han Qiaosheng, Song Chengliang and Li Yi, hundreds of big footballers from other fields on the platform, and many industry media such as football newspaper to form a CSL team to bring immersive viewing experience to Weibo platform users. At the same time, users can also sign in to clubs already on the platform for additional voting rights, cheer for their favorite teams and players on the Super League Cheer list, and get first-hand off-field information by following teams and players with one click. 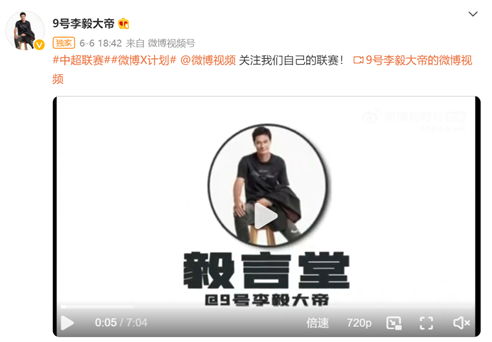 At present, 18 Chinese Super League clubs and 618 coaches and players have opened the Super League service, achieving complete coverage. During the tournament, the club will promote fans to visit and participate in the community discussion through the activity of "signing in to unlock the limited title" to create a good cheering atmosphere. Among them, Dalian People Professional Football Club's super word "Dalian People" has accumulated more than 224,000 fans. After its replacement into the Chinese Super League this year, the style of "pressing and playing" has become a new slogan for fans to post discussions.

Live streaming has also become a standard feature of microblogs in sports. In 2022 season, in addition to the previous live programs, Weibo has jointly created a number of new IP programs, such as "Big Talk Zhongchao", "Wait and see" and "The Sound of Rumi". Among them, "Super League" will be broadcast live around the hot events of the Chinese Super League, and invite well-known international players and cross-border big V to participate in it, while "Wait and see" and "Voice of Lumi" will be created by senior Chinese football journalist Yu Jing and senior fans of Shandong Taishan, respectively, to create differentiated content. At the same time, Weibo also combines the live discussion room function launched this year with the CSL match, promoting users to watch the match and chat about the match with Big V in the room, so as to fully mobilize users' activity.

"Every event brush weibo" fixed action will be perpetuated in the Chinese super league, weibo will 5.82 YiYue with its complete coverage of the industrial chain and the advantage of active users, show the head of social media platforms are bred in a sports event IP great value, will help the Chinese super league partners settling social assets, further enhance the brand influence. Not only that, 2022 is a big year for sports events. The quadrennial World Cup at the end of the year may continue the popularity of Chinese Super League football, setting a new height for the whole network to participate in football events.

Related news
Samsung announced the release of key-value SSD prototype that meets industry standards
Suning e-buy: will present super members to all medical staff nationwide
Why do Internet companies buy E-sports teams in succession?
RTX 2070Super suddenly resurrected a flood of stocks into the Chinese market
The English name of Chinese liquor has been changed: Chinese Baijiu has been officially launched
Tesla's Chinese Rivals See Record Monthly Delivery on Further Recovery from Covid
Weibo has become the official social media platform of the Chinese Super League to help club players build high-value social assets
Hot news this week
The new rules of Internet popover will be implemented on September 30, and the chaos of "bully screen advertising" is expected to be eradicated
Google is shutting down its Stadia cloud gaming project, with the developers involved saying they had no knowledge of the plans
Brother sent a mobile phone to pay 200 yuan to pay the owner to the police: money is not scraped by the wind
Mate 50 Kunlun version is in short supply! Huawei additional production capacity: October supply can improve
IPhone6 officially "retired", its series sold 250 million units, second-hand purchase price is now as low as 100 yuan......
After a lapse of 28 years, the Chinese women's basketball team won the World Cup runner -up Li Meng's T -shirt on fire
Woman addicted to 'A Sheep' husband worried about being cheated to report for help: official confession
Apple responds to the iPhone accident monitoring cannot be triggered 100%: no minimum requirements are met
Meituan Wang Xing: Chinese auto companies will definitely win, "NIO, Huawei, ideal" will replace BBA to occupy the high-end market
Google Cloud gaming platform Stadia will close, with the underlying technology or focus on the toB business
The most popular news this week
WIN11 has a biggest rollover for the first time! Microsoft admits that the performance of large files in version 22H2 declines
It proves why Einstein's wrong science has won the Nobel Prize for more than 40 years? Too few people know
Intel Viper Canyon NUC national bank shelves: first hand price 9999 yuan
The king of mobile chips is laying off 20% of its headquarters
High -tech warm temperature+5 degrees Netease strict coffee carbon kent underwear 104 yuan
Bi Huawei Mate 50 Pro expensive IP14 Plus Tomorrow: 60Hz screen sells nearly 10,000 yuan
Girls walk to play mobile phone hit telephone pole forehead bulge: hope friends learn a lesson
The Snapdragon 8 Gen2 flagship of the Year is here! The standard battery may not even be 4000mAh
Boot up is the new high-end flagship of Android 13 first look: performance is crushed by iP14
Are you enough? Microsoft announced that all compatible users can upgrade win11 2022