"Sheep a sheep" fire, is expected to attract hundreds of millions of financing? But it doesn't have a license...

Recently, the wechat mini program game "Sheep a Sheep" exploded in popularity, attracting many players to participate and spreading widely. However, the game similar to "Match 3" exploded in popularity, which is not the precedent, and attracted many investors to participate. Dream Games raised $468 million in a year with Royal Match. There have also been cases where bingo has hit ipos in China.

To some investors questioned, marketing operation, subject and "virus" well done is to have the potential of the financing, but need to point out is, reporters learned from indirect participation enterprise gigabit relevant personage, now the game didn't have the plate number, investment whether there is a risk of the games will continue to focus on.

In addition, the industry has its source code of the message, but gigabit aspects, said the game code has to do relevant protection, but the listed company as the investor is not only operators, if involves the infringement will be investigated for legal responsibility, in addition, for the thunder subsidiaries interactive investment income will make public in the subsequent results.

"Sheep has a sheep" has super financing potential?

In recent years, mobile game play and story innovation emerged in endlessly, but the long-term stay at the fingertips of users is very rare, "match three" games is one example, but with the intensification of competition, developers are also in the scene and operation mode optimization, will "change the old" business.

"A sheep" has recently been applied for registration by the development company Beijing Jianyou Technology (hereinafter referred to as "Jianyou Technology"). Information from Qixinbao shows that the company has applied for registration of two trademarks, and the current trademark status is under application. The game is talked about in the city, also attracted a lot of ridicule, about the difficult customs clearance, advertising placement obvious, hot search topic discussion, etc., also because of this, is its online offline to obtain a high transmission rate. 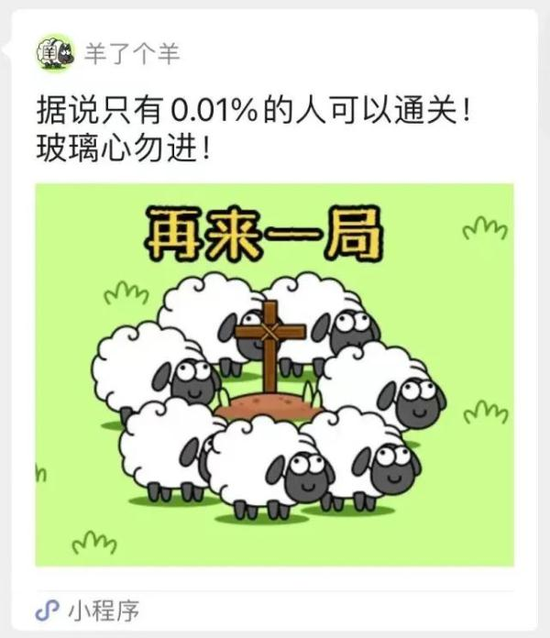 But at the end of the day, it's a match-three game, similar to other games like "Happy Match-Three", "Bingo Match-three", "Flying House Match-three", and although the strategies involved are different, they're more or less the same.

However, with the constant change of players' interests, timely and accurate prediction of game users' interests, preferences and consumer demands, and targeted launch of new game products to attract new users and retain old players have become the key factors for the success of game development, and are also the investment evaluation criteria valued by investors.

Public information shows that many of these "match-three" games have received capital investment, especially for the developers of related games, which have received multiple rounds of financing. For example, Le Element Technology (Beijing) Co., Ltd. has A number of products such as "Happy Displeasure" and "Seaside Displeasure". The company was founded in 2009 and obtained A round of financing of $5 million in 2010. In the following six years, four rounds of financing were supplied.

There has been a surge in foreign funding, with Turkish game company Dream Games alone raising $468 million in just one year, thanks largely to its "Match 3" title Royal Match. According to Sensor Tower's previous data, the $3.7 billion or more triple-elimination puzzle games are regularly featured in the game charts, suggesting that the match-3 market has a lot of potential to grow.

On September 20, the "Daily Economic News" reporter contacted the game operator of one of the equity companies, Gigabit, relevant people told reporters that the game is indeed no game license number, the game investment will continue to pay attention to whether there is a risk. However, it did not explain the future merger and acquisition and listing plans of the projects.

It is reported that before the domestic "happy elimination music", "Bingo elimination music" have rushed to IPO, but finally have been terminated, the key reason is that the revenue of a single game accounted for the developer company's revenue proportion is too heavy, obviously from the market and regulatory attitude, similar to the "single core" operation model to list is not easy.

However, others in the investment community say [money] is just profit-seeking and doesn't need to be that smart. "There are risks, but it's not like there aren't investors out there who want to play the miniprogram game even though it has bugs." Some people in the investment community said on September 20 when communicating with reporters on wechat.

For the marketing operation, create a topic, "viral spread" way, the investment community said, from the perspective of investment is actually more support. "Its model is to use the second level of sadness as a gimmick, and then use people's general curiosity and comparative psychology to stimulate more people to challenge, form a topic, and spread 'viral'."

But at present, the game or only the commercial form of advertising placement, the aforementioned Gigabit people told reporters, "Sheep sheep" financial data will be involved in the next listed company's financial results, but did not disclose in detail at present. However, in the eyes of the aforementioned investors, if you really want to invest, there will be hot will be attention, so it is not difficult to attract some financing, but the consumer heat will not last long, soon this wind will pass.

Related news
China's first open source agreement was born, friendly than Apache License
DO U ALWAYS GET MONEY BUT WONDER HOW IT VANISHES CALL ON +27
Partner Needed For A Multi Million Business Venture.
China's New Energy Vehicle Sales in June Expected to Set New High over Fiscal Stimulus
Blue all night! Why does "Sheep a Sheep" come out: if you do n’t play, you will be out ...
"A sheep" of the "money" journey, the driving force behind the water has broken 100 million......
"Sheep a sheep" fire, is expected to attract hundreds of millions of financing? But it doesn't have a license...
Hot news this week
According to sources, SoftBank founder Masayoshi Son has not made a proposal to Samsung to invest in Arm
Brother sent a mobile phone to pay 200 yuan to pay the owner to the police: money is not scraped by the wind
China Confinement Association said on the rumor of Haitian soy sauce "dual standard": support enterprise rights protection
Mate 50 Kunlun version is in short supply! Huawei additional production capacity: October supply can improve
Apple iPhone 14 / Pro blessing, optical lens supplier Datu Guang's revenue in September 22 months new high
After a lapse of 28 years, the Chinese women's basketball team won the World Cup runner -up Li Meng's T -shirt on fire
IPhone6 officially "retired", its series sold 250 million units, second-hand purchase price is now as low as 100 yuan......
Apple responds to the iPhone accident monitoring cannot be triggered 100%: no minimum requirements are met
The revenue of Ruiyu, a major network chip manufacturer, was about 2.156 billion yuan in September, down 1.85 percent year on year
Meituan Wang Xing: Chinese auto companies will definitely win, "NIO, Huawei, ideal" will replace BBA to occupy the high-end market
The most popular news this week
Foxconn has announced that it will contract manufacture electric cars and build prototypes for INDIEV in Ohio
Latest ranking: Huawei first, ZTE fourth!
Ding Yun, vice chairman of the Huawei Supervisory Board, died of a sudden illness Huawei: He expressed deep condolences to his unfortunate death
European Union antitrust regulators have questioned Microsoft to see if it can compete fairly after buying Activision Blizzard
Today, I took a set of online signals to compare it ...
Xiaomi 13 series of news summary: a total of 3 model Snapdragon 8 Gen2 blessing
Musk wants to turn Twitter into wechat, but he may struggle to pull it off
Three o'clock before the Apple Officer who can hit the 20 % off. Before buying the machine
When playing games, I interact with my boyfriend too close: the girl after the 1 00 of foreign countries will hurt her sister
Wolf on mobile? Chinese copycat "The Phantom Wolf: Darkest Hour" hits shelves