Unlisted companies with corporate valuations of more than $1bn have been known as "unicorns" for a decade. The number of unicorns, which has grown from about 40 to more than 1,100, is now facing the headwinds of monetary tightening and a number of overseas setbacks. The business model of start-ups, once flush with cash and primed for future growth, is turning a corner. 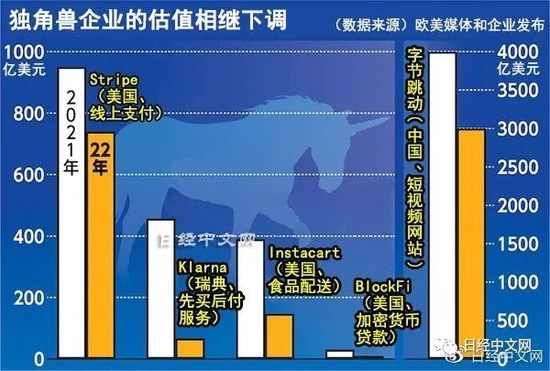 "It's winter for listed stocks, but the winter for unicorns will last longer," Masayoshi Son, chairman and CEO of SoftBank Group Corp., said in an earnings briefing in August. Whereas listed stocks fluctuate from day to day, the revaluation of unlisted stocks is limited to the time of capital raising. Son believes the decline in listed high-tech stocks after the spring of 2022 will gradually spill over to unlisted stocks.

In fact, some of SoftBank's investment targets have already seen their valuations drop. In July, Sweden's Klarna, a buy-now, pay-later service, raised money at a valuation that was 85% lower than a year earlier. China's ByteDance, the world's largest "unicorn" company, will carry out a share buyback based on a company valuation of around $300 billion, the report said. Appears to be as much as 25% below its valuation in the private markets in 2021.

Behind it lies the actions of "non-traditional investors" such as SoftBank and Tiger Global Management, the US hedge fund. Against a backdrop of low interest rates, these funds have since 2017 stepped up investment in start-ups that were once the monopoly of venture capital, particularly by pouring money into companies whose payback was near, driving up valuations.

Now, however, the situation has "reversed" in the context of rising interest rates. According to CB Insights, the median valuation of start-ups that raised more than five rounds was $2 billion in January-June 2022, down from $2.1 billion in 2021. New "unicorns" are also declining, confirming the changing attitudes of non-traditional investors. 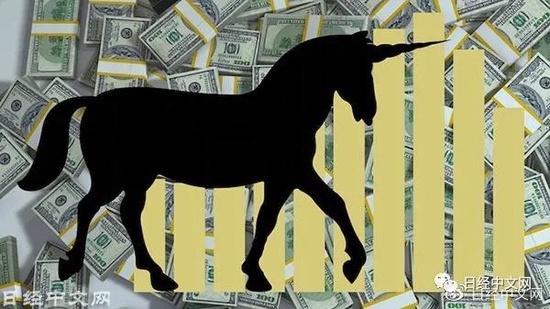 Unicorns need to cope with a new business environment. "In recent years investors have been very focused on future growth, but also profitability," said Sebastian Siemiatkowski, chief executive of Klarna, which raised money after slashing its valuation. Klarna has cut 700 jobs, or 10% of its workforce, tightened credit management and put more emphasis on profitability.

Not many companies are being forced to downgrade their valuations. PitchBook statistics show that less than 10 percent of U.S. startups raised money from April to June. Among investors, there are many calm voices such as Yosuke Bundo, general partner of DCM Ventures in the U.S., who said, "In recent years, we have easily raised more money than we can afford, but now we are moving toward a normal situation."

On the other hand, it is also true that lower valuations will reduce the value of the holdings of founders and early shareholders, demoralizing employees who are paid more in options. Miguel Fernandez, CEO of Capchase, a U.S. investment firm, said, "If the current market environment is maintained, it will be more difficult for startups to maintain high valuations," warning of more downvaluations in the future.

After the dotcom bubble burst in the early 2000s, Facebook (now Meta) was born in the US, and the 2008 US financial crisis was the catalyst for Airbnb. The survival of the fittest environment, where only the strong survive, is not necessarily bad, but it is entering a situation where growth and defence must be balanced. Japan, whose national growth strategy is to cultivate unicorns, is not immune to this.

Related news
Large-scale advertising fraud? Google off the Baidu DO Global 46 applications
Large-scale advertising fraud? Google off the Baidu DO Global 46 applications
HMD global announces extended warranty policy for Nokia mobile users
HMD global said that Nokia's new phone is equipped with snapdragon 690
Hot news this week
With the NIL technology, Canon wants to provide China with a lithography machine comparable to the EUV
The Long March 9 is basically confirmed: the low-orbit carrying capacity of 150 tons can carry the entire space station into space
A small plane in the US has crashed into a 30-metre high voltage power line and got stuck: 80,000 people affected
Alibaba launched a new cross-border e-commerce platform in Spain, aiming to operate independently in the middle and high-end market
Can recording others' wechat chat records be used as evidence? The Beijing Internet Court has an answer
Google is concerned that Microsoft's acquisition of Activision Blizzard will affect the ChromeOS experience
When pure water is used in China team to solve the problem of seawater hydrogen production: it is expected to become an original industry
It's not just Huawei! Beidou has penetrated more than 20 industries and applied more than 15.5 million products
The second generation Snapdragon 8 flagship! Mi 13 toughened film appeared: four sides and other narrow screen accounted for a stable ratio
A Tesla crashed into two cars in Taizhou, Zhejiang province, killing two and injuring one, police said
The most popular news this week
What a fan! Netizens spend ten thousand yuan to get three mobile phones at once: beautiful
A bachelor's degree is needed for a New York City rat control manager who earns 1.2 million yuan a year
4090/80 Take that! Third party pre-orders for AMD RX7900: The most expensive over 11,000
Mi 13 series press conference preview: It is likely to start 3999
Wu Jing endorsed the new model, which goes on sale next week: the 512GB version is almost half the price of the iP14 Pro Max
Why did Chinese fans come to Qatar
Sega Technology: intends to increase the total capital of US $1 million in US Electric with related parties
Analyst: Apple's iPhone 15 portfolio will be more 'balanced' with all Smart Island features
Apple countersued AliveCor, which pioneered the ECG patents
Mi fans lucky draw a Mi 13: exclaiming "outrageous" is equal to earning 4,000 for nothing