Haitian Weiye issued a statement to deny the "dual standard": Do not affect the reputation of China's world -made world!

Recently, some short videos pointed out that the soy sauce of Haitian Flame Industry was & ldquo; Hex Technology Food & RDQUO;. On September 30, Haitian Weiye issued a statement saying that the food additives contained in the company's products meet national standards and regulatory requirements.

However, unfortunately, the above statement did not settle disputes, and it once again caused Internet controversy. Some netizens broke the news that Hai Tian soy sauce sold in China contains food additives, while the Haitian soy sauce sold abroad is added, only water, soybeans, wheat, salt, etc. , Its product production is & ldquo; dual standard & rdquo;.

At 00:00 on October 5th,Haitianwei official WeChat again issued a statement saying that food additives are widely used in food manufacturing of countries around the world, and regular food companies in the world will use food additives in accordance with regulations and product characteristics, and clearly identify them in accordance with regulations.

Food additives have become an indispensable part of the modern food industry. From food additives, it is not possible to conclude that Chinese food is worse than foreign foods. & ldquo; Simply believe that there are fewer food additives for foreign products, or that products with additives are not good, they are all misunderstandings. & rdquo;

For the product & ldquo; dual standard & rdquo;, Haitianwei Industry explained in the statement that food regulations in each country and region are different, and the corresponding product logos are also different. One country (region) is awarded, and many non -food industries at home and abroad and even many other non -food industries are done. With the demand for diversified consumption, both domestic customers and foreign dealers often put forward the needs of customized products. Customized products will inevitably bring more and more product logos. Some quality are different, and some products are different. 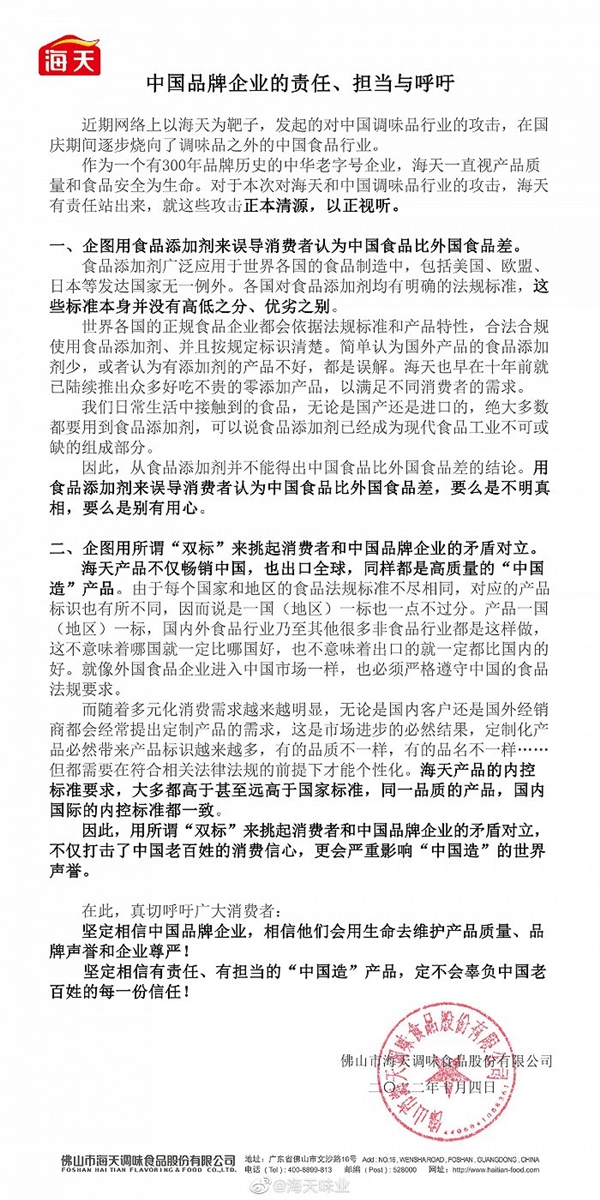 Most of the internal control standards of Haitian products are higher than or even higher than national standards. Products of the same quality and domestic and international internal control standards are consistent. & ldquo; Using & lsquo; dual standards & rsquo; provoking the contradiction between consumers and Chinese brand companies not only crack down on the consumption confidence of the Chinese people, but also affects the world reputation of & lsquo; Chinese manufacturing & rsquo; & rdquo;

According to the "National Standard Food Additives of Food Safety" (GB 2760-2014), food additives refer to the chemical synthesis in food in order to improve food quality and color, fragrance, taste, and the need for anticorrosion and processing technology Natural material.

Regarding the problem of Haitian soy sauce food additives, the doctorate of food engineering is unwilling to think it is normal. & ldquo; Whether at home or abroad, the manufacturers only meet the needs of the target group under the premise of & lsquo; legal & rsquo; thereby selling things to make money. Add or not added. What is added is aimed at your own customer group, the flavor characteristics and corresponding prices formed. & rdquo; Yun Wuxin expressed his views on Weibo.

Not only soy sauce, other foods will also be appropriately put in food additives. & ldquo; Most foods are in line with the taste of the public. Food additives can further make up for the lack of raw materials and make it consume the expectations of consumers. As long as the amount does not exceed the standard, there is no harm to the human body. & rdquo; Industry insiders in a food industry said in an interview with the Red Star Capital Bureau. Taking wine as an example, the main additive of wine is potassium sulfate, and contact with acid will release irritating sulfur dioxide gas, which has a strong bacteriostatic anticorrosive effect.

In recent years, soy sauce producers have launched products with & ldquo; zero & rdquo; selling points. In this regard, Changcheng, a part -time pharmaceutical researcher at Nanjing Kangzhuang Asset Management Co., Ltd., believes that zero -added food is a manifestation of the manufacturer's pursuit of the public's pursuit of food health. Consumers should treat food additives reasonably. & ldquo; Consumers usually add zero and pure naturally as a good standard, but zero adding is not necessarily equivalent to completely healthy, and products with food additives are not the same as inferior products. & rdquo;

In addition, according to the "Healthy China Action Plan (2019-2030)", the per capita salt (sodium) intake of per capita is not higher than 5g (5 grams equal to 5000 mg). Chang Cheng also suggested that & ldquo; soy sauce contains sodium, regardless of or zero additives, and overlook is not a healthy diet. & rdquo; 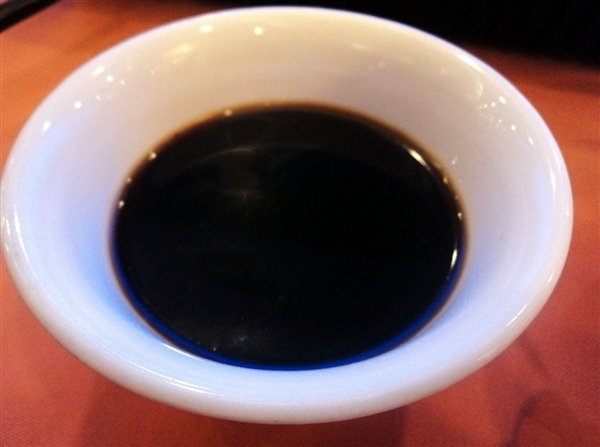 Related news
Foxconn has bought land in Vietnam: will iPhone "MADE IN VIETNAM" in the future? (figure)
Maybe next year you'll get an iPhone 12 labeled "made in India."
China, U.S. Issue Joint Declaration on Climate Action at GOP26
China to Crack Down on Illegal Fundraising Targetting the Elderly
Telecom Operators Essential for the Metaverse:China Mobile Chairman
Haitian Weiye issued a statement to deny the "dual standard": Do not affect the reputation of China's world -made world!
Hot news this week
Sources say Penguin Random House's deal to buy Simon & Schuster has fallen through
Any chance of taking over the agency? Sources say Tencent has been in contact with Blizzard for at least a year
Blizzard's founder responded to NetEase's contract renewal: Cooperation is a two-way street, and we will do our best to make Blizzard games accessible to Chinese players
Ali suddenly released a new chip, the domestic chip breakthrough, abandoned the American chip fantasy
Better than Huawei or Apple? It is revealed that Samsung S23 uses satellite communication: can also space voice
Players recognized as the best of the year! The Old Man Ring won four awards at the 2022 Pension Rocker Awards
Chaozhou accident relatives do not recognize the third party identification! Why doesn't Tesla Provide Driving Data?
Today is the 18th anniversary of Blizzard's World of Warcraft: unfortunately, the national service will be discontinued in January
According to sources, TSMC replaced Samsung to win a large order of Tesla's assist driving FSD chip, based on the 4/5nm process
Jinshanyun reported revenue of 1.97 billion yuan in the third quarter, down 18.4 percent year on year
The most popular news this week
Saudi player dispels rumours of winning after being awarded Rolls-Royce Phantom: No matter
The super flagship endorsed by Wu Jing hits the shelves: almost all the front screens will be released next week
Huawei Watch Buds: two-in-one design of watch earbuds
No wonder people still don't buy TV when the price is down
Qualcomm developed PC processor behind: ARM toothpaste kiss son architecture is not good
Flavor is "technology and hard work"? Don't worry about it!
Tesla's new car will be returned after being bought three times in three days
Zhang Guowei wins in Australia: Don't forget to shoot a scientific video to see Meng netizens
A $140 million fine! Apple Still Buys iPhone Without Charger: What can it do to me?
The European Union could launch an antitrust investigation into Microsoft by tying Teams to Office