After first hitting the desktop market, AMD's Zen4 architecture's next stop will be servers and data centers, codenamed Genoa, the Xiao Long 9004 series, with up to 96 cores and 192 threads.

MLIS has now revealed the full size, specifications, and even official features of the Xiaolong 9004 series.

Yes, this time even the baseline, acceleration frequency is a range of values.

In fact, the regular version of the Xiaolong 9004 series,Acceleration frequency is all 3.5-3.7GHz, is the highest frequency 2.9GHz。

Four more are optimized for high frequencies, both with F suffix, can accelerate to 4.0GHz or higher. 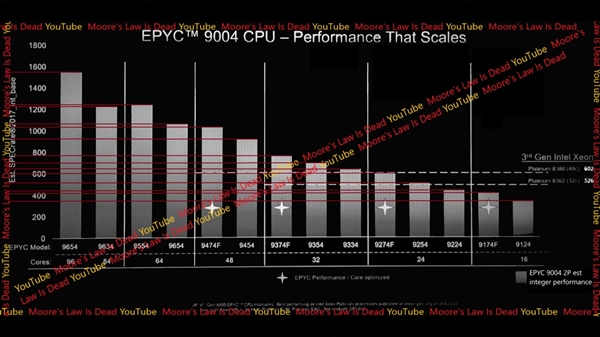 SPECrate 2017 Integer_Base is used as an example.There is an almost perfect linear relationship between the score and the number of cores.

Intel's current third generation, which can be scaled up to 40 cores, turns out to be in the same league as the 24 cores of the Xiaolong 9004 series. 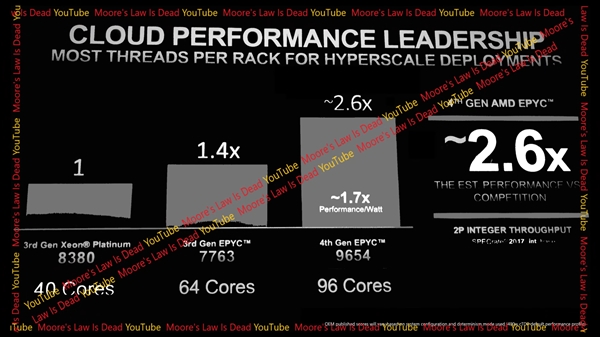 AMD also claims that the Xiaolong 9654 performs as well as the Platinum 8380, flagship-to-flagship, about 2.6 times better than its rivals!

Of course, Intel also has a 4th generation scalable to the strong Sapphire Rapids, but one with a maximum of 60 cores and the other with endless delays will probably not be released until the second quarter of next year, later than the RollerDragons 9004 series. … 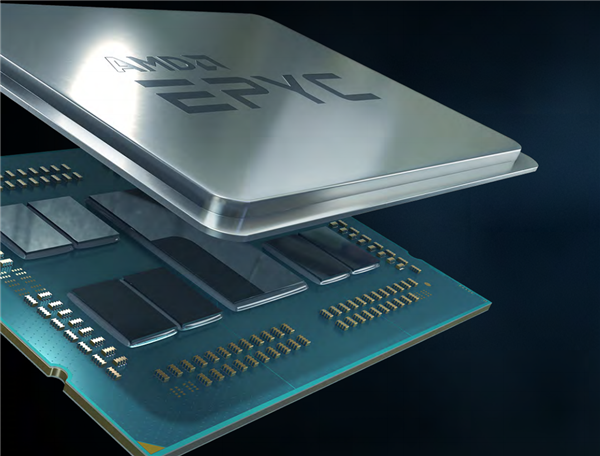 Related news
Exposure of AMD's early roadmap: zen4 did consider single core four thread technology
Easy 32 cores! The AMD Zen4 Ryzen™ 7000 has changed completely
AMD Zen4 rivals! Intel 13th generation Core is here
AMD Zen4's performance flies! Intel 13th generation Core but no worry
AMD Zen4 spell it! The 16 core is close to the Intel 24 core
AMD Zen4 96 Core leak: 2.6x crushing Intel!
AMD Zen4 cheap new U here: performance, heat satisfactory
AMD Zen4 beats Intel 13 Core by a huge margin
96-core Zen4 release AMD's pocketbook is secure: Friends won't catch up for years
AMD Zen4 sharp dragon wildly reduce the price of the role of not much: sales than Zen3 one-fifth
Hot news this week
The first in the world! Intelligent screening system for visual impairment of infants and young children
World's first: Sun Yat-sen University has developed a mobile phone intelligent screening system for infants with visual impairment
Sources said Samsung Electronics is considering cutting chip production in the first quarter or a huge loss
The source code of the official website shows that the Microsoft Build 2023 developer Conference will be held on May 23-25.
The rendered picture of Meizu experience Center is exposed: there are cars and mobile phones to build 1000 stores.
At least 29000 facilities were affected, and WeiUnicom announced that there were serious loopholes in QTS and QuTS hero.
256G is not enough! Bloggers bought Xiaomi phone 512G has used up more than 300G: WeChat accounted for 70G
Regret that the medicine is gone! Apple closes downgrade channels for multiple versions such as iOS on 16-15-12.
Xiaomi tablet 6 key specifications steal run: high brush domestic screen Snapdragon 870 can also play!
Musk, the richest man in the world, also suffered a huge loss when he bought bitcoin by Tesla, who "cut leeks".
The most popular news this week
Microsoft's new version of Bing appears briefly: full access to ChatGPT
Bill Gates: the history of ChatGPT is as significant as "PC or the birth of the Internet"
The "iPhone 14" Letv mobile phone Y1 Pro+ sold for only 499 yuan becomes JD.com TOP3.
Man QQ Music lost 1.32 million in playing games in the studio: he was fooled by the anchor!
Intel China special edition Xinshen U suddenly went on sale: 1599 yuan cost-effective
The price of ZTE flagship endorsed by Wu Jing has been reduced! The overall screen impression is better than Apple Smart Island.
Meizu 20 Series supports UWB Ultra Wideband Technology through Radio approval
Huawei P60 series will debut in March: Snapdragon 8+ has a larger aperture than the iPhone 14 Pro Max
China suddenly announces new developments in 6G, and there is little hope that the United States will surpass 6G technology.
Dell said it was laying off 5 percent of its workforce, affecting about 6,650 jobs