Priced at $329, Apple's flagship store in the United States now sells a smart door lock that can be unlocked with an iPhone or Apple Watch 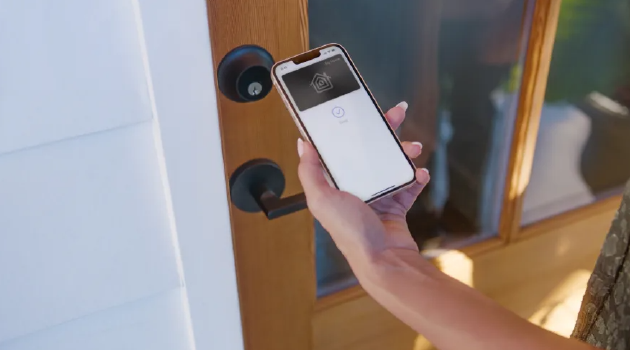 Sina science and technology news Beijing time on October 24 morning news, according to reports, the United States Apple flagship store has begun to sell the door lock that can be unlocked by Apple Watch or iPhone. The $329 Level Lock+ is the first Home Key-enabled lock to be sold at Apple's flagship store.

Level Lock+ is produced by Level Home. Once the device is installed on the door, users can open and close the door with just a touch of Apple's Home Key feature. The Home Key is a feature that uses NFC and security tokens in Apple's software to unlock and unlock locks. Users can send the key to a friend via text message or automatically open the door directly from their Apple device.

For Apple, this is an important advance on a highly anticipated feature announced in 2021. The Home Key is a sign that Apple is still pushing ahead with digitalization, integrating everything from cash to keys that you would normally find in your wallet or pocket into a digital device.

Many of the new software Apple has introduced in recent years is intended to increase the value of the iPhone to users and keep them from switching to other brands. For users, if the door to their home is also tightly tied to their phone, they are much less likely to switch to an Android phone.

Some of Apple's new projects, particularly in the smart-home space, often require third-party hardware or ecosystems to work. But that kind of hardware and software isn't entirely under Apple's control, as opposed to the various features that come with iOS updates, so it often takes longer to catch on.

In addition to the Home Key, Apple also unveiled the Car Key, which can unlock some BMW and Hyundai cars, and the Room Key, which can open some hotel rooms at Hyatt and other hotel chains. Apple's iPhone is more deeply integrated with cars through CarPlay, and it has partnered with Goldman Sachs to offer a wider range of financial services to users.

For Level, it's a chance to make a comeback as a tech company in a market dominated by a handful of established door locks. That's because the core users who are the most passionate about smart homes are hungry for this feature.

"The category is facing a problem right now." "The question is: Is a smart door lock a consumer electronic device or a traditional door lock with smart features?" said John Martin, the chief executive of Level.

Last week, Level Lock+ went on sale early in some regions, allowing some journalists and users to get their hands on the product. Since then, it has been abundantly clear how hungry Apple users are for the new Home Key locks.

"Our chief marketing officer, Andrew Samson, came over from Nike. He's good." "He called me late at night and said, 'Oh my God, we're a hit! '"

But some users on the forum expressed disappointment when they learned that Level would not be updating the firmware of older locks to support the Home Key. To buy a Level door lock that supports the Home Key function, you need to go to Apple's flagship store or online store.

"We are not planning a firmware update for Touch." "We need to innovate on the basics inside the product to support Home Key in a great way," Mr. Martin said.

Related news
iPhone and Apple Watch are expected to be used to prevent stroke
Strong Money Spells in United States (USA) | spiritual rats
Some iPhone 13/Pro "failure" does not support the Apple Watch unlock screen
Priced at $329, Apple's flagship store in the United States now sells a smart door lock that can be unlocked with an iPhone or Apple Watch
Hot news this week
At least 29000 facilities were affected, and WeiUnicom announced that there were serious loopholes in QTS and QuTS hero.
The source code of the official website shows that the Microsoft Build 2023 developer Conference will be held on May 23-25.
The rendered picture of Meizu experience Center is exposed: there are cars and mobile phones to build 1000 stores.
Musk, the richest man in the world, also suffered a huge loss when he bought bitcoin by Tesla, who "cut leeks".
256G is not enough! Bloggers bought Xiaomi phone 512G has used up more than 300G: WeChat accounted for 70G
Xiaomi tablet 6 key specifications steal run: high brush domestic screen Snapdragon 870 can also play!
Regret that the medicine is gone! Apple closes downgrade channels for multiple versions such as iOS on 16-15-12.
Beihang Professor unveils FIG Leaf, consumer anger, Why is advanced technology difficult to win user recognition?
Only high-end models have? The exposure of the periscope camera lens is limited to the iPhone 16 Pro Max
Meta earnings release analysts: Snap turning profit into loss in the fourth quarter is good news for it and Google
The most popular news this week
Microsoft's new version of Bing appears briefly: full access to ChatGPT
Bill Gates: the history of ChatGPT is as significant as "PC or the birth of the Internet"
Why does the United States keep cracking down on Huawei, but we don't do anything to Apple?
Samsung promises firmware update to solve the problem of plummeting Pro SSD health value
AI such as CEO:ChatGPT, parent company of "GTA5", will raise standards in the game industry.
Huawei's entry into the electric bicycle Tailing official announced that the combination of strong and powerful forces will open a new era.
Huawei P60 appeared and ran: it was quite unexpected to carry the processor.
Yingchi set foot in the game display for the first time: 27-inch 2K screen, 165Hz high brush
Who says Jixian can't play games? Evaluation of Lenovo's new Pro 16 2022 sharp dragon version
Domestic version of ChatGPT! Baidu version has successfully registered ERNIE trademark: opened in March