AMD Zen4 Ryzen upgrade but "shrink"! More than 4 cores do not run at 5.5GHz

AMD today released a new version of the AGESA microcode for the Zen4 Ryzen 7000 series, version 1.0.0.3. This is the first update since the launch of the new platform, but it is a bit of an update. Step backwards & throughout; .

The new version reintroduces the Precision Boost C-State Boost Limiter (PBO) limit that was previously missing from AGESA 1.0.0.2. When more than four cores are simultaneously under heavy load, such as rendering, large games, toasters, etc. The maximum acceleration frequency will be limited to no more than 5.5GHz. 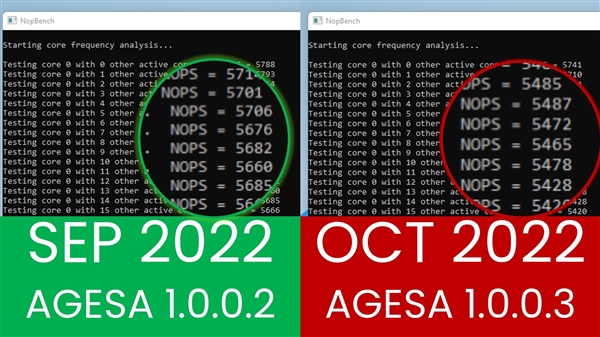 A NopBench test on a fast Asus ROG CROSSHAIR X670E EXTREME motherboard found that the Ryron 9 7950X 16 cores could accelerate to around 5.7GHz using the 0046 and 0611 BIOS versions earlier. 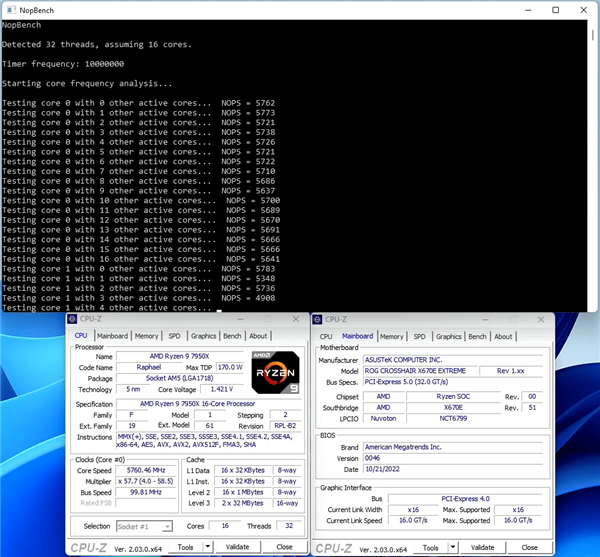 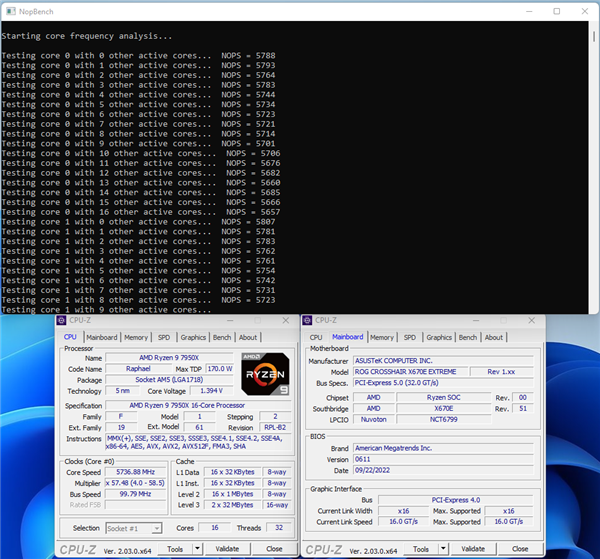 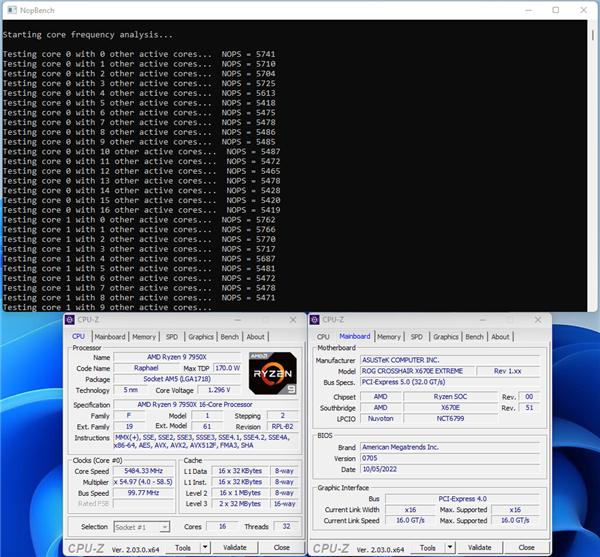 Compare the blue and green curves in a graph to make it more clear: 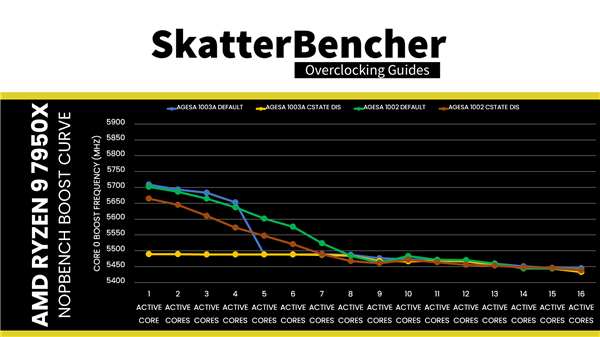 There will be some performance penalty, of course, butIt should be due to the dual considerations of power consumption, heat and safetyAfter all, the entire core is at ultra-high frequencies and could be unstable or even damaged.

If you insist on multi-core high frequency, you can stick with the older BIOS.

Asus motherboard users can find it in the new BIOS.Medium Load Boostit” And turn it on, you can bypass the acceleration limit and continue to get multi-core high frequencies. 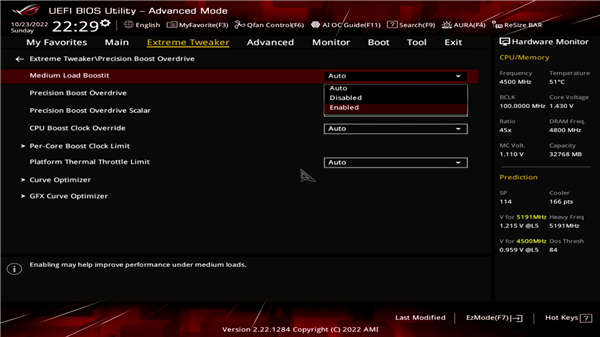 Take a look at the red curve below: 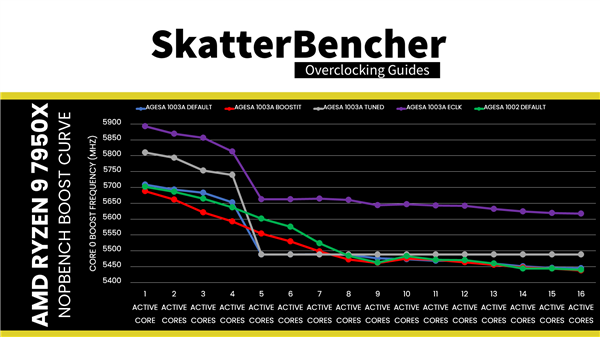 By the way, part of the motherboard can also be combined with BIOS constitution (see SP value level),Set the maximum acceleration frequency for each coreTo make the frequency of physical fitness run higher. 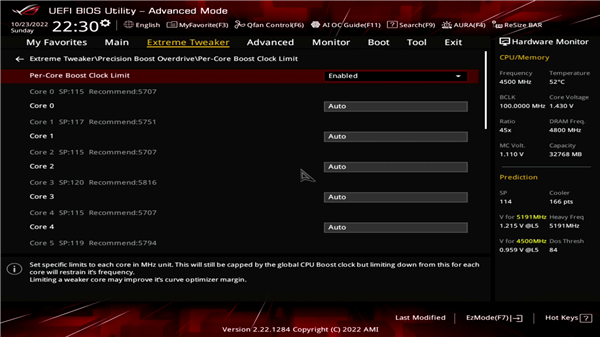 Related news
The biggest upgrade in 5 years AMD confirms that the 5nm Zen4 Ryzen™ 7000 processor will be available next week
Finally super 5GHz! AMD Zen4 Ryzen™ Details Official Announcement: Single-Core Leap 15%
5nm Zen4 performance! AMD official website steals a number of Ryzen 7000 processors
AMD Zen4's performance flies! Intel 13th generation Core but no worry
Acceleration frequency 5.85GHz! AMD Zen4 This is going to fly
AMD Zen4 overclocked at 5.6ghz: Still not catching up with the 12G Core
Zen4 + RDNA3! AMD's next -generation APU runs up: the first time it is "smart"
AMD Zen4 Ryzen upgrade but "shrink"! More than 4 cores do not run at 5.5GHz
AMD Zen4 Ryzen Killer shrunk: 8/6 core only for now
AMD badly needs the 3nm Zen5: unfortunately, not until 2024
Hot news this week
The first in the world! Intelligent screening system for visual impairment of infants and young children
World's first: Sun Yat-sen University has developed a mobile phone intelligent screening system for infants with visual impairment
Sources said Samsung Electronics is considering cutting chip production in the first quarter or a huge loss
The source code of the official website shows that the Microsoft Build 2023 developer Conference will be held on May 23-25.
The rendered picture of Meizu experience Center is exposed: there are cars and mobile phones to build 1000 stores.
At least 29000 facilities were affected, and WeiUnicom announced that there were serious loopholes in QTS and QuTS hero.
256G is not enough! Bloggers bought Xiaomi phone 512G has used up more than 300G: WeChat accounted for 70G
Regret that the medicine is gone! Apple closes downgrade channels for multiple versions such as iOS on 16-15-12.
Xiaomi tablet 6 key specifications steal run: high brush domestic screen Snapdragon 870 can also play!
Musk, the richest man in the world, also suffered a huge loss when he bought bitcoin by Tesla, who "cut leeks".
The most popular news this week
Microsoft's new version of Bing appears briefly: full access to ChatGPT
Bill Gates: the history of ChatGPT is as significant as "PC or the birth of the Internet"
The "iPhone 14" Letv mobile phone Y1 Pro+ sold for only 499 yuan becomes JD.com TOP3.
Man QQ Music lost 1.32 million in playing games in the studio: he was fooled by the anchor!
Intel China special edition Xinshen U suddenly went on sale: 1599 yuan cost-effective
The price of ZTE flagship endorsed by Wu Jing has been reduced! The overall screen impression is better than Apple Smart Island.
Meizu 20 Series supports UWB Ultra Wideband Technology through Radio approval
Huawei P60 series will debut in March: Snapdragon 8+ has a larger aperture than the iPhone 14 Pro Max
China suddenly announces new developments in 6G, and there is little hope that the United States will surpass 6G technology.
Dell said it was laying off 5 percent of its workforce, affecting about 6,650 jobs