'Blizzard wants NetEase to work for nothing,' says source

Blizzard Entertainment said in a statement on Nov 16 that it will suspend most of its Blizzard game services in the Chinese mainland due to the expiration of its current licensing agreement with NetEase on Jan 23, 2023.

"No renewal agreements have been reached that are consistent with Blizzard's operating principles and commitments to its players and employees. These agreements will expire in January 2023," Blizzard said in a statement.

Regarding the contract renewal dispute between Blizzard and NetEase, the Observer network exclusively learned from the source close to NetEase that Blizzard policy to renew the contract put forward the price of the conditions, some terms can even be described as "disgusting".

According to the person, Blizzard's share of revenue and net profit will be more than 50 percent higher than the 2019-2022 contract period, and Blizzard's game pricing will be synchronized globally, while the Chinese service pricing is generally about 20 percent lower than the rest of the world.

In addition, Blizzard has asked NetEase to develop other Blizzard IP mobile games for global distribution in the Diablo: Immortal model, but NetEase will only enjoy a share of the revenue in China.

Blizzard also requires NetEase to pay a large amount of deposit or prepaid payment to guarantee the completion of Article 2, failing which, NetEase will be "penalized".

Informed sources to the observer network frankly, if the renewal conditions are true, Blizzard is tantamount to requiring NetEase to "work for nothing".

In a public response, NetEase said it had been doing its best to negotiate with Blizzard and hoped to push ahead with the renewal. After prolonged negotiations, NetEase was still unable to reach an agreement with Activision Blizzard on some key terms of the cooperation. "It is with great regret that Activision Blizzard has announced today that they are discontinuing their partnership, and we will have to accept the decision. NetEase will continue to fulfill its duties and serve our players until the last moment."

Affected by the related news, NetEase's share price plummeted on the morning of November 17, down by 11.34% to HK $100.9 / share as of press time. Today, A - share Hong Kong game sector bucked the trend, NetEase became one of the few to fall. 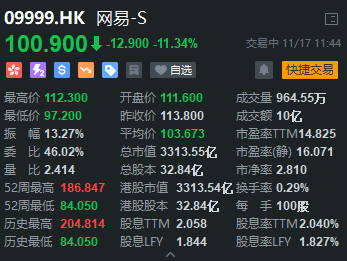 According to the announcement, the games Blizzard will suspend include World of Warcraft, Hearthstone, Overwatch, Starcraft, Warcraft III: Remastered, Diablo III, and Heroes of the Storm. Blizzard Entertainment has had a license agreement with NetEase since 2008 covering the distribution of these Blizzard games in China. The co-development and release of Diablo: Immortal, however, involved a separate deal between the two companies.

Mike Ybarra, president of Blizzard Entertainment, said: "We have been bringing our games to China through NetEase and other partners for nearly 20 years, and we are very grateful for the enthusiasm shown by the Chinese community, whose passion and creativity inspire us as we look for alternatives to bring our games to gamers in the future."

When Activision Blizzard reported its third-quarter 2022 earnings on Nov. 8, it said its agency agreement in China would expire in January 2023 and that it was under discussion to renew the agreement, but that a mutually satisfactory outcome might not be reached.

In addition, according to the earnings report, the current agreement covers Blizzard's China releases (World of Warcraft, StarCraft II, Hearthstone, Overwatch, etc.), which account for about 3% of Activision Blizzard's consolidated 2021 net revenue. However, Activision Blizzard's revenue sources are mainly Activision, Blizzard Entertainment and King, among which the businesses of Activision and King are not directly related to NetEase.

According to NetEase's report for the second quarter of 2022, NetEase's revenue from games and related value-added services was 18.1 billion yuan, up 15.0 percent year on year, accounting for 78 percent of the total revenue. Not long ago, NetEase announced that it will release its financial results for the third quarter of 2022 before the market on November 17 Eastern time (Beijing time on the evening of November 17).

Related news
Former co-founder of Yijia mobile founded D2c brand noting
Transparent headphones after the stretchive tricks Nothing want to transparent mobile phones?
#%2348026461693 I WANT HOW TO JOIN SECRET OCCULT FOR MONEY
%%%##[[+2348026461693]],,,, I WANT TO JOIN OCCULT FOR MONEY
'Blizzard wants NetEase to work for nothing,' says source
After Blizzard officially issued a "letter of separation" to NetEase, who will be the next agent?
Blizzard, NetEase break up! "Sky-high" contract extension conditions exposed: want to let NetEase to work for nothing
Blizzard is said to have "asked NetEase to work for free", sources said that the relevant report is not true
Hot news this week
With the NIL technology, Canon wants to provide China with a lithography machine comparable to the EUV
Genius hacker Geohot promised Musk 12 weeks to fix Twitter search, but posted for help because he wouldn't react
Google's parent company is planning to cut tens of thousands of jobs
The Long March 9 is basically confirmed: the low-orbit carrying capacity of 150 tons can carry the entire space station into space
A small plane in the US has crashed into a 30-metre high voltage power line and got stuck: 80,000 people affected
Can recording others' wechat chat records be used as evidence? The Beijing Internet Court has an answer
Alibaba launched a new cross-border e-commerce platform in Spain, aiming to operate independently in the middle and high-end market
Google is concerned that Microsoft's acquisition of Activision Blizzard will affect the ChromeOS experience
The second generation Snapdragon 8 flagship! Mi 13 toughened film appeared: four sides and other narrow screen accounted for a stable ratio
A Tesla crashed into two cars in Taizhou, Zhejiang province, killing two and injuring one, police said
The most popular news this week
The most controversial generation of Windows: Vista turns 16!
Apple lost $56.1 billion on Black Friday! Production of the iPhone 14 is expected to drop by nearly 10 million units
Chinese storage stands up: SSD forced overtaking! World giants like Samsung lag behind
QQ membership via SMS has become a thing of the past: Tencent officials said the relevant business functions have been offline
Two men ransacked an Apple store and made off with more than 200,000 products: a textbook move by the employees
South Korea 2-1 Portugal repeat Asian miracle: Lei Jun with Xiaomi 13 thumbs up
The standard version is unbeatable and sells for 3,999 yuan for Mi fans
Two new Huawei devices are ready to launch: one is more creative
For the first time ever! NVIDIA graphics card to play the game flash screen must refresh the BIOS
Samsung Galaxy Z Flip5 exposure: Larger screen, fewer creases