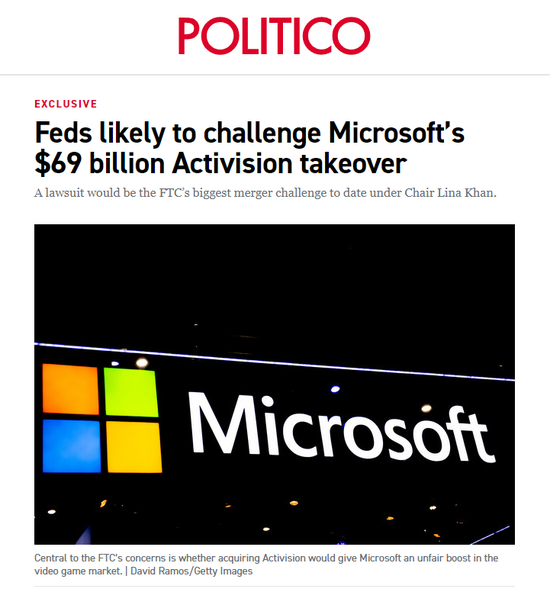 At the heart of the FTC's concerns is whether the acquisition of Activision would give Microsoft an unfair boost in the video game market. Microsoft's Xbox came in third place to industry-leading SONY Interactive Entertainment and its PlayStation console. However, SONY has emerged as a leading opponent of the deal, telling the FTC and regulators in other countries that it would be at a significant disadvantage if Microsoft made popular games such as Call of Duty exclusively available on its platform.

IT House understands that in a statement submitted to the UK's Competition and Markets Authority in October outlining SONY's position, which was published on Wednesday, SONY said the deal would not only hurt its ability to compete, but would also leave consumers with less choice in games and developers with less choice in publishing them. "Microsoft is a 'tech Titan,' buying irreplaceable content at an undisputed price ($68.7 billion) to push its competitive advantage to itself," SONY said.

In its own statement, released Wednesday by British regulators, Microsoft accused SONY of making deluded claims to maintain its No. 1 position in the gaming sector. "It is implausible to suggest that SONY, the incumbent market leader with clear and enduring market power, could lose a game to Xbox, the weakest of the three console contenders."

Microsoft says it has repeatedly promised to keep Call of Duty on SONY's PlayStation, and that the game isn't a must-have as SONY says. In addition, Microsoft points out that the game is not currently available on any subscription services and adding it to the Xbox service in the future would not hurt SONY.

To a lesser extent, Google is also an opponent of the deal, according to two people familiar with the matter. The company believes that Google's Chrome OS deliberately downplayed the quality of its GamePass subscription service, and that owning Activision would further incentivizes it to do so, ultimately driving hardware sales toward Microsoft and away from Google, these people said.

Google is a bit player in the gaming industry and is winding down its own online gaming service, Stadia. However, it has come under antitrust scrutiny around the world, including for its conduct in the gaming market.

Microsoft has pledged to keep "Call of Duty" on SONY's Playstation consoles and recently made an offer to make the game available to SONY over the next 10 years, and it is not known how SONY will respond to that offer.

The FTC's concerns go beyond Call of Duty, however, and investigators are trying to determine how Microsoft can use future unannounced games to boost its gaming business, according to two people briefed on the review.

"Any suggestion that the deal could lead to anti-competitive effects is completely absurd." "This merger will benefit gamers and the U.S. gaming industry, especially at a time when we face increased competition from abroad," said Activision spokesman Joe Chrisinat. We are committed to continuing to work with regulators around the world to allow the transaction to proceed, but we will not hesitate to defend this transaction."

Activision also disputes Epic's claims. "Epic's allegations are nonsense," Christinat said. "We can confirm that Google has never asked us, pressured us, or made us agree not to compete with GooglePlay -- and we have submitted documents and testimony proving this."

Microsoft spokesman David Cuddy said the company is "prepared to address the concerns of regulators, including the FTC, and SONY to ensure the transaction is completed with confidence. After the deal closes, we will still be behind SONY and Tencent in the market. Activision and Xbox together will benefit gamers and developers and make the industry more competitive."

Technically, the FTC does not need to take any action at this time. Regulators in Europe and the UK have also recently conducted in-depth investigations, meaning the companies will not be able to complete deals until the spring at the earliest. That means if the FTC does Sue, it could do so in its own internal administrative court.

Related news
Facebook Zuckerberg personally goes to FTC to testify in response to antitrust investigation
The FTC in the United States is reported to conduct an antitrust investigation into Microsoft's acquisition of Activision Blizzard
The biggest acquisition in gaming history! Microsoft is paying more than $42 billion for Activision Blizzard
Microsoft's acquisition of Activision Blizzard is about to be finalized, as soon as August passed FTC review
In a world first, Saudi Arabia approved Microsoft's Xbox acquisition of game maker Activision Blizzard
Does Microsoft's Acquisition of Activision Blizzard Fail? "Call of Duty" is the key to regulators' greater scrutiny than expected
Sources say the FTC may file a lawsuit to block Microsoft's $69 billion acquisition of Activision Blizzard
Activision Blizzard exec: Microsoft acquisition good for industry and gamers, vows to defend deal
Hot news this week
Sources say Penguin Random House's deal to buy Simon & Schuster has fallen through
Any chance of taking over the agency? Sources say Tencent has been in contact with Blizzard for at least a year
Blizzard's founder responded to NetEase's contract renewal: Cooperation is a two-way street, and we will do our best to make Blizzard games accessible to Chinese players
Ali suddenly released a new chip, the domestic chip breakthrough, abandoned the American chip fantasy
Better than Huawei or Apple? It is revealed that Samsung S23 uses satellite communication: can also space voice
Players recognized as the best of the year! The Old Man Ring won four awards at the 2022 Pension Rocker Awards
Chaozhou accident relatives do not recognize the third party identification! Why doesn't Tesla Provide Driving Data?
Today is the 18th anniversary of Blizzard's World of Warcraft: unfortunately, the national service will be discontinued in January
According to sources, TSMC replaced Samsung to win a large order of Tesla's assist driving FSD chip, based on the 4/5nm process
Jinshanyun reported revenue of 1.97 billion yuan in the third quarter, down 18.4 percent year on year
The most popular news this week
For the first time, China surpassed the United States and was recognized as the world's largest in the number of valid patents
SoftBank has developed technology to use drones to detect mobile phone signals from people buried in disasters
Tencent Holdings: Purchased 1.29 million shares today at a cost of HK $351 million
Saudi player dispels rumours of winning after being awarded Rolls-Royce Phantom: No matter
The super flagship endorsed by Wu Jing hits the shelves: almost all the front screens will be released next week
Huawei Watch Buds: two-in-one design of watch earbuds
No wonder people still don't buy TV when the price is down
Qualcomm developed PC processor behind: ARM toothpaste kiss son architecture is not good
Flavor is "technology and hard work"? Don't worry about it!
Tesla's new car will be returned after being bought three times in three days