On November 23, Gamma-Data released its October 2022 Game Industry Report (hereinafter referred to as the Report). Data showed that the actual sales revenue of China's game market in October was 19.768 billion yuan, the first month-on-month growth in nearly six months.

Among them, the actual sales revenue of China's mobile game market was 13.555 billion yuan, which also changed from negative to positive for the first time in the last 6 months. 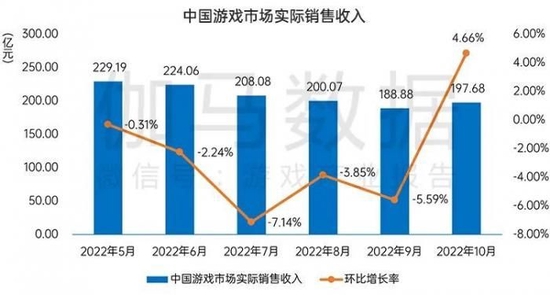 It's still down nearly 20% from last year

In the new tour in October, The Most Unlikely 2, The Empty Fortress: The Voyage, The Lord of the Sands, The Tale of Gems: Ian's Stone, and The Land of Wind were the first top five grossing games.

However, the above five new products on the list showed obvious polarization: only the first two games entered the top 100 list of Gamma data mobile games in October, and the first month's revenue is estimated to exceed 100 million yuan, while the other three ranked lower.

Gamma Data pointed out that the National Day holiday bonus intensified market competition is the main reason for the poor performance of new travel this month. Moreover, most of this month's new products are of the quadratic style, and the quadratic game market has gradually become saturated, so the new products of this month are under great pressure to break the list.

While China's game market revenue stopped months of decline in October, it is still down year on year and 18.10% lower than October 2021 revenue.

Also on the decline are actual sales of offshore games. According to the report, the actual sales revenue of China's self-developed games in overseas markets in October was $1.354 billion, down 5.79% from the previous month, and the market size hit a new low in nearly June.

Zhang Shule, a game industry analyst, said domestic games are losing their window of opportunity as foreign manufacturers adapt to the way Chinese games play overseas and downsize the console, PC and console experience to mobile games. If Chinese manufacturers want to further break into the overseas market, they need to improve the quality of their games, innovate the gameplay of their categories, and develop reasonable Pipeline and promotion plans.

Another game industry analyst told 21 reporters that the year-on-year decline in the global game market revenue has also affected the overseas performance of Chinese game companies to some extent.

'In our country, the entertainment nature of electronic games has always led people to ignore the scientific significance behind it for a long time,' the article said. In fact, games have been linked to cutting-edge technology since their inception. With its booming development, the game industry is also helping to unleash new growth drivers for the digital economy.

The problem of gaming addiction among minors has been basically solved, with more than 75 percent of them playing games for less than three hours a week, according to the 2022 Progress Report on the protection of Minors in China's game industry, jointly released by the Game Working Committee of the China Audio and Digital Association and the China Game Industry Research Institute and Gamma Data on Nov 22.

In addition, on the evening of November 17, the website of the National Press and Publication Administration released the game plate numbers again after two months, and 70 games passed the approval and got the latest batch of Chinese game plate numbers.

In an interview with 21st Century Business Herald, Zhang looked into the future development of the game industry. He believes that China's game industry will continue to slow down in the future and become more "red sea" as more online and offline entertainment types come into play.

"The 'homebody economy' of the pandemic didn't actually lead to an explosion of the games industry, but only a temporary dividend. In addition, due to aesthetic fatigue, users are losing to short live video or other online types of pan-entertainment due to limited choices, and crowding into the offline entertainment scene, which further exposes the shortcomings of the domestic game industry in the lack of high-quality products and fewer types." 'he said.

This is also mentioned in the aforementioned report on the protection of minors jointly released by the Game Working Committee of the China Music and Digital Association and other units. According to the report, about 65 percent of minors switched to short video platforms after their games were restricted.

In the secondary market, the share prices of Chinese game companies are slowly recovering at the bottom of the stage recently.

In late October, the stock prices of game companies such as Tencent Holdings (00700.HK) and NetEase (09999.HK) fell repeatedly under the influence of the macro environment and market sentiment, briefly falling below their respective key levels. In the next few weeks, most companies' share prices bottomed out.

The 21st Century Business Herald noted that the share prices of most listed game companies have yet to recover to their late September levels, and there is still a long way to go. Zheshang Securities analysts recently reminded that the current time, the game industry policy side marginal improvement is very obvious, but the epidemic prevention and control optimization after the game time decline has not arrived.

Related news
Next feature update confirms windows 10 October 2020 version number locked 19042.508 (Fig.)
Arrow on the string: Windows 10October 2020 feature update to be released (photo)
Apple Doubles Clean Energy Suppliers in China
Tesla China First Shatters Delivery Record in Six Months amid Covid's Fading
Hot news this week
Sources say Penguin Random House's deal to buy Simon & Schuster has fallen through
Any chance of taking over the agency? Sources say Tencent has been in contact with Blizzard for at least a year
Blizzard's founder responded to NetEase's contract renewal: Cooperation is a two-way street, and we will do our best to make Blizzard games accessible to Chinese players
Ali suddenly released a new chip, the domestic chip breakthrough, abandoned the American chip fantasy
Better than Huawei or Apple? It is revealed that Samsung S23 uses satellite communication: can also space voice
Players recognized as the best of the year! The Old Man Ring won four awards at the 2022 Pension Rocker Awards
Chaozhou accident relatives do not recognize the third party identification! Why doesn't Tesla Provide Driving Data?
Today is the 18th anniversary of Blizzard's World of Warcraft: unfortunately, the national service will be discontinued in January
According to sources, TSMC replaced Samsung to win a large order of Tesla's assist driving FSD chip, based on the 4/5nm process
Jinshanyun reported revenue of 1.97 billion yuan in the third quarter, down 18.4 percent year on year
The most popular news this week
For the first time, China surpassed the United States and was recognized as the world's largest in the number of valid patents
SoftBank has developed technology to use drones to detect mobile phone signals from people buried in disasters
Tencent Holdings: Purchased 1.29 million shares today at a cost of HK $351 million
Saudi player dispels rumours of winning after being awarded Rolls-Royce Phantom: No matter
The super flagship endorsed by Wu Jing hits the shelves: almost all the front screens will be released next week
Huawei Watch Buds: two-in-one design of watch earbuds
No wonder people still don't buy TV when the price is down
Qualcomm developed PC processor behind: ARM toothpaste kiss son architecture is not good
Flavor is "technology and hard work"? Don't worry about it!
Tesla's new car will be returned after being bought three times in three days