As one of the most recognized film platforms in China, CCTV-6, CHC series pay channels and CMC series International channels are all professional channels mainly broadcasting films, with about 70 films broadcast every day.

The Film Channel has about 20,000 Chinese and foreign films, more than half of which are shot on film.

Although these film materials have been digitally saved, the damage of fading, scratches and dirty spots in the preservation process of the original film has directly affected the picture quality of the film and reduced the playback quality, which is in urgent need of repair.

On the other hand, with the technological progress of shooting, storage, transmission, display and other dimensions, people's entertainment audio-visual experience has undergone tremendous changes compared with decades ago, and the audience's demand for ultra-high definition video is constantly increasing. 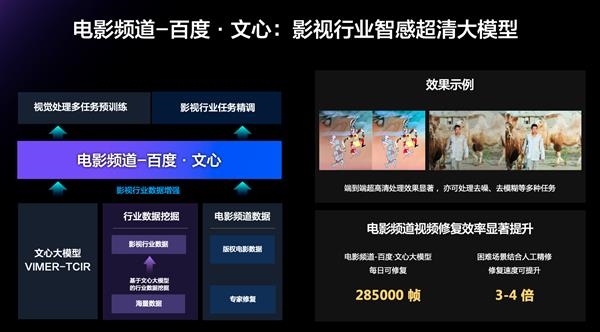 The test data showed thatUse movie Channel - Baidu · Wenxin large model can repair 285,000 frames of video every day, which solves the problem of repairing most of the pictures. Even if further refinement is required, the repair speed can be increased by 3-4 times.

In addition, movie channel - Baidu · Wenxin Grand model also has a wide range of application prospects in film and video production. For example, in the super-clear of old films, adaptive color enhancement, clarity enhancement, timing interpolation frame, SDR conversion to HDR can be implemented for the films, so as to comprehensively improve the picture quality of old films and make them glow with new vitality, so that excellent classic old films can meet the picture quality requirements of the new era.

This time, Baidu and Movie Channel jointly released the intelligent super high-definition model, which deeply combines Baidu AI's technical capability and the long-term accumulated video repair data of Movie channel. Through the joint pre-training of multi-tasks such as super resolution, noise removal, blur removal and compression, and the learning of the number of hundred million parameters, it simultaneously realizes the repair of various damage situations. And enhance the clarity of the video by improving the picture quality and sharpening the edge, so as to improve the efficiency of the video repair and the effect of the visual experience in an all-round way. 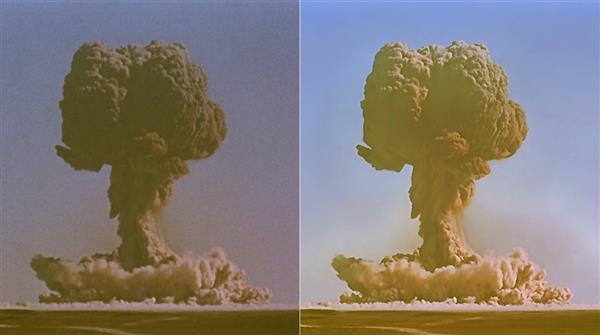 On the right is the restoration scene from the film "Born Out of Nowhere".

Related news
CCTV-7 revised version of the CCTV-7 military agricultural channel changed to the national defense military channel next month
Tencent Music Entertainment Group and Comix wave films Inc. strategic cooperation
The English name of Chinese liquor has been changed: Chinese Baijiu has been officially launched
China’s First Desktop Operating System Developer Platform openKylin Launched
Tesla's Chinese Rivals See Record Monthly Delivery on Further Recovery from Covid
CCTV-6 launched film restoration and ultra clean about 20,000 Chinese and foreign films revitalized
Hot news this week
Sources say Penguin Random House's deal to buy Simon & Schuster has fallen through
Any chance of taking over the agency? Sources say Tencent has been in contact with Blizzard for at least a year
Blizzard's founder responded to NetEase's contract renewal: Cooperation is a two-way street, and we will do our best to make Blizzard games accessible to Chinese players
Ali suddenly released a new chip, the domestic chip breakthrough, abandoned the American chip fantasy
Better than Huawei or Apple? It is revealed that Samsung S23 uses satellite communication: can also space voice
Players recognized as the best of the year! The Old Man Ring won four awards at the 2022 Pension Rocker Awards
According to sources, TSMC replaced Samsung to win a large order of Tesla's assist driving FSD chip, based on the 4/5nm process
Today is the 18th anniversary of Blizzard's World of Warcraft: unfortunately, the national service will be discontinued in January
Jinshanyun reported revenue of 1.97 billion yuan in the third quarter, down 18.4 percent year on year
Xiaomi Q3 has not returned to the normal growth track. Wang Xiang: The idea of high-end strategic quick wins is incorrect
The most popular news this week
China AVS3 video, audio standards rise! 8K/4K/ mobile for the first time
AMD ripper is finally not lonely! Intel Fever U returns to 56 core hard carry 64 core
The price of Xiaomi 13 to 4,500 yuan has sparked heated debate among netizens: Should you buy Xiaomi at more than 4,000 yuan
Thunder online game accelerator announced that it will be officially suspended on December 1
With the NIL technology, Canon wants to provide China with a lithography machine comparable to the EUV
Wechat iOS version 8.0.31 private test update: Added the function of dragging pictures and videos to send with one key
AMD Zen4 12 core price record low! The cumulative price drop is 20%
Priceless metal is thrown away: One million scrap mobile phones can recycle 68 kilograms of gold
The world's first 6GHz! Intel's "Ashes Edition" arrives early: You're out of the sky
SONY loosen up! PlayStation's multi-year super exclusive is coming to PC