IT House on November 26 news, to the first breach. A talented teenage hacker known for his iPhone3GS and PS3. @GeorgeHotz (nickname   Geohot is now on board at Musk's invitation. Twitter, and promised Musk that he would fix Twitter's "crumbling" search function within 12 weeks.

IT House has learned that Geohot is known for first cracking Apple's vaunted software in 2008. He was sued by SONY a year later for cracking the PlayStation3, but the two eventually settled out of court. Hotz has now agreed to join Twitter on a "temp" basis.

In fact, Geohot has been busy with various projects in the years since he became famous. For example, he joined Facebook in June 2011 for mystery work, he joined Google in July 2014 for ProjectZero, and now he is gradually starting his own business, CommaAI. It also launched its autonomous driving system, CommaOne.

It's worth noting that Musk offered him a multimillion-dollar contract to develop autopilot software for Tesla in 2015, but Geohot turned it down and the two had a falling out.

But since Musk took over Twitter, he's been laying off employees like crazy and asking the remaining employees to work overtime. Musk was pleased when GeorgeHotz said last week that he could work for the company for three months and that "it's not about money, it's about making the world come alive." 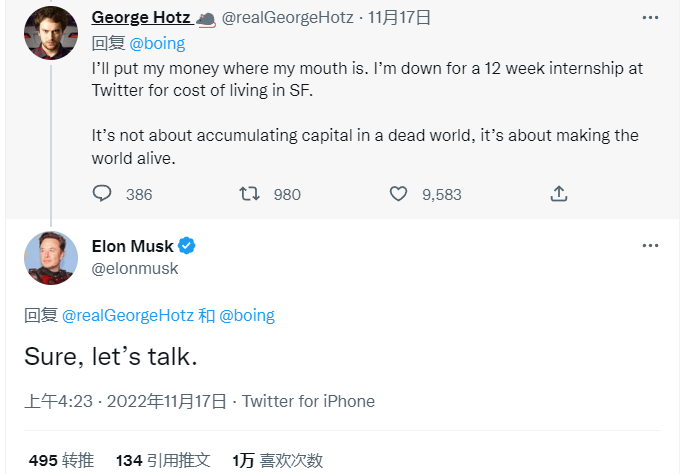 He also tweeted about what he promised Musk to do to fix "a search function that thousands of people haven't been able to figure out for months," though he didn't disclose how much he was paid for the three months. 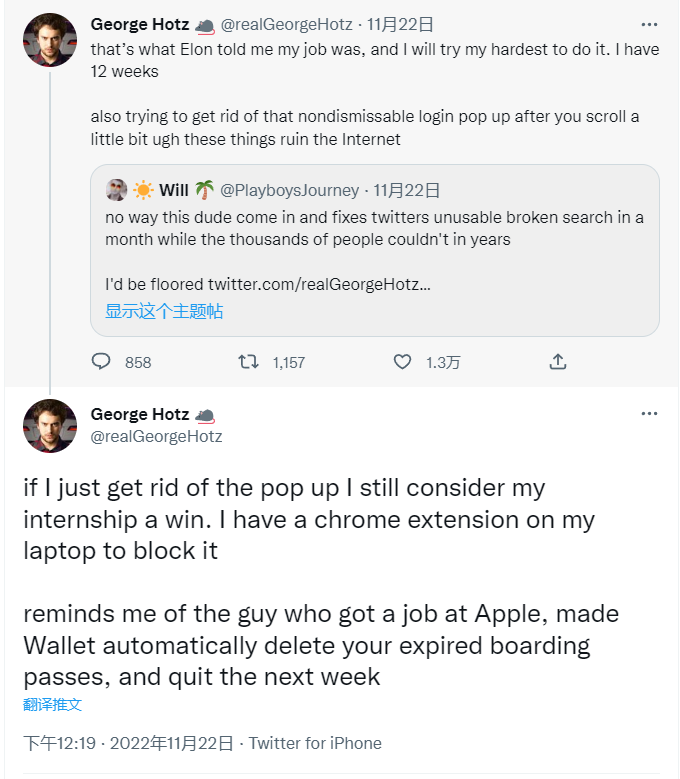 Then he began his work. 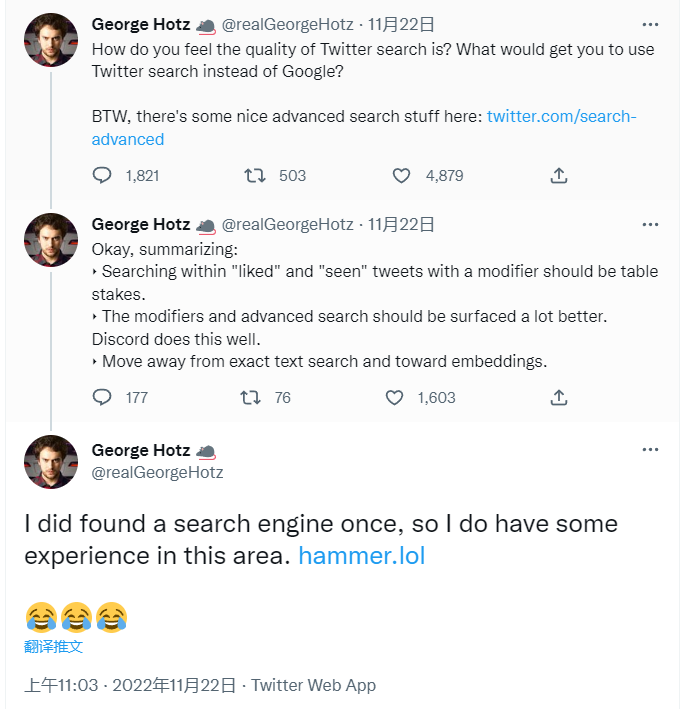 However, he encountered a number of issues along the way, such as front-end code issues, and had to post for help on how to change react. 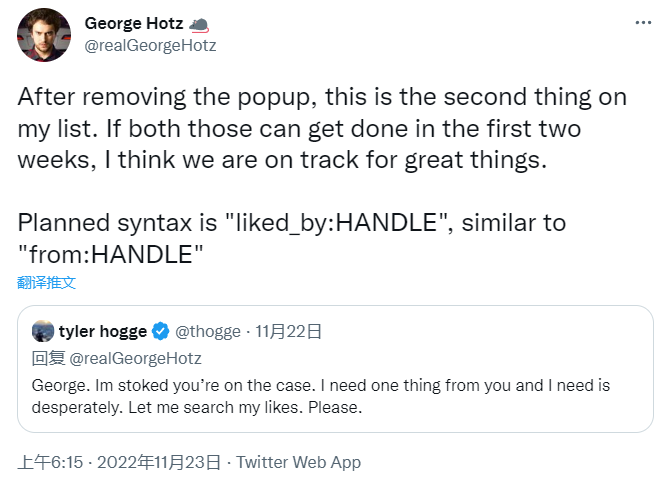 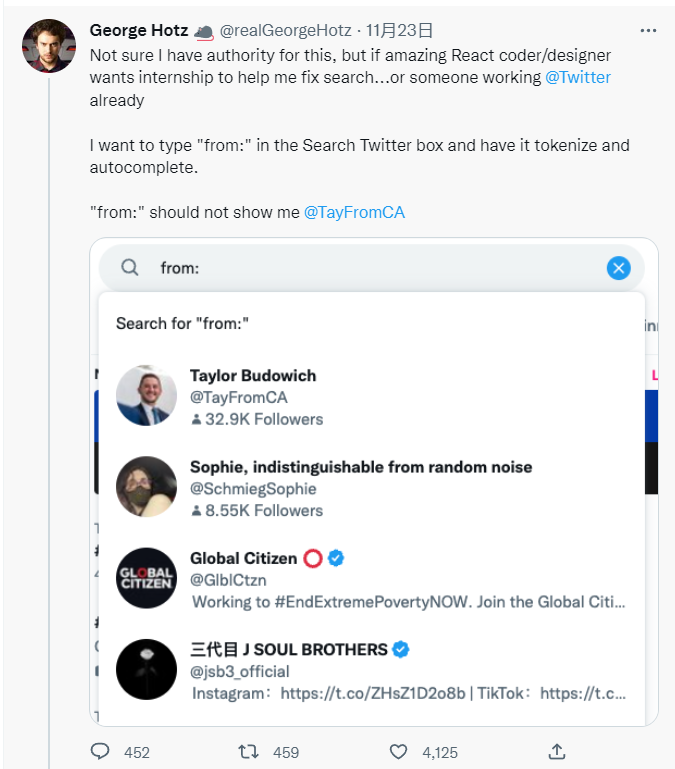 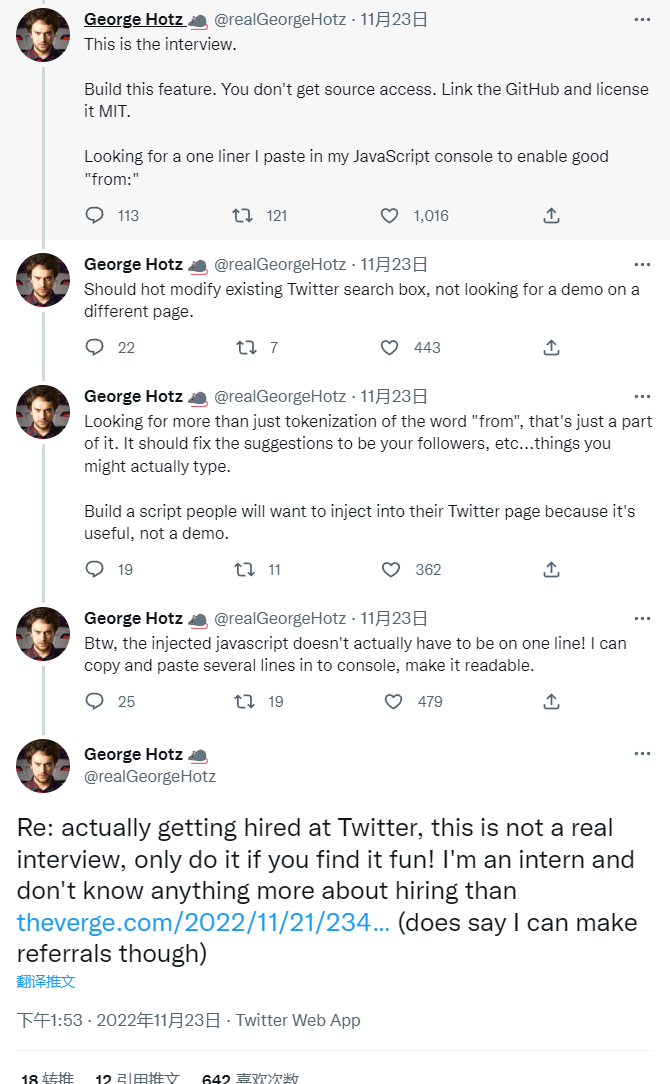 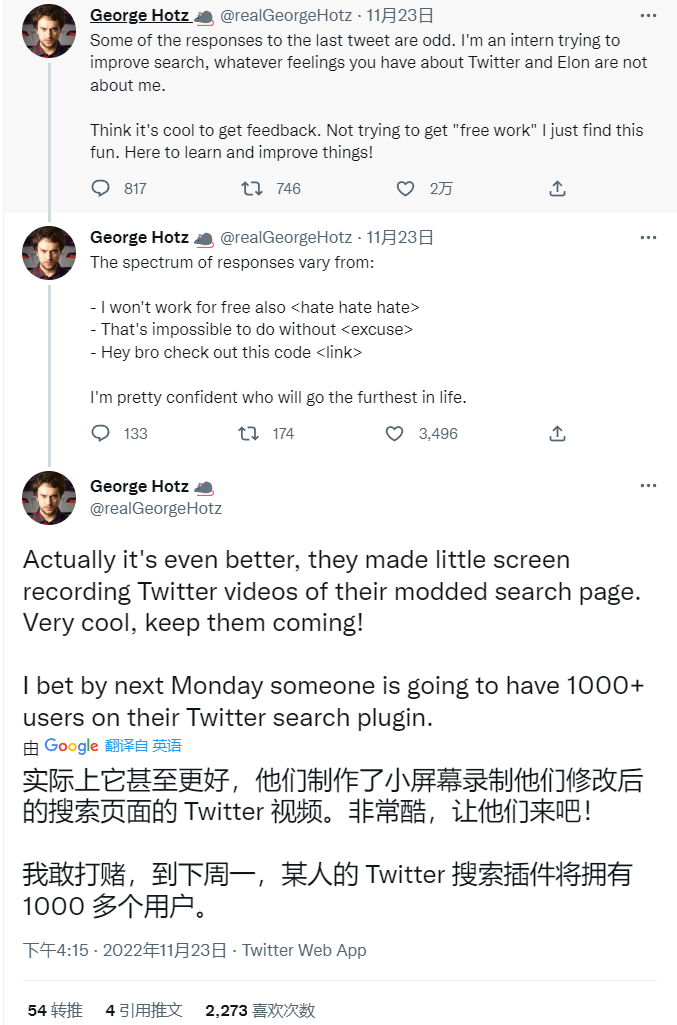 He also showed off a search function based on open source code, which shows that he's really trying to work for Musk. As for the final result, it may be 11 weeks before we see it. 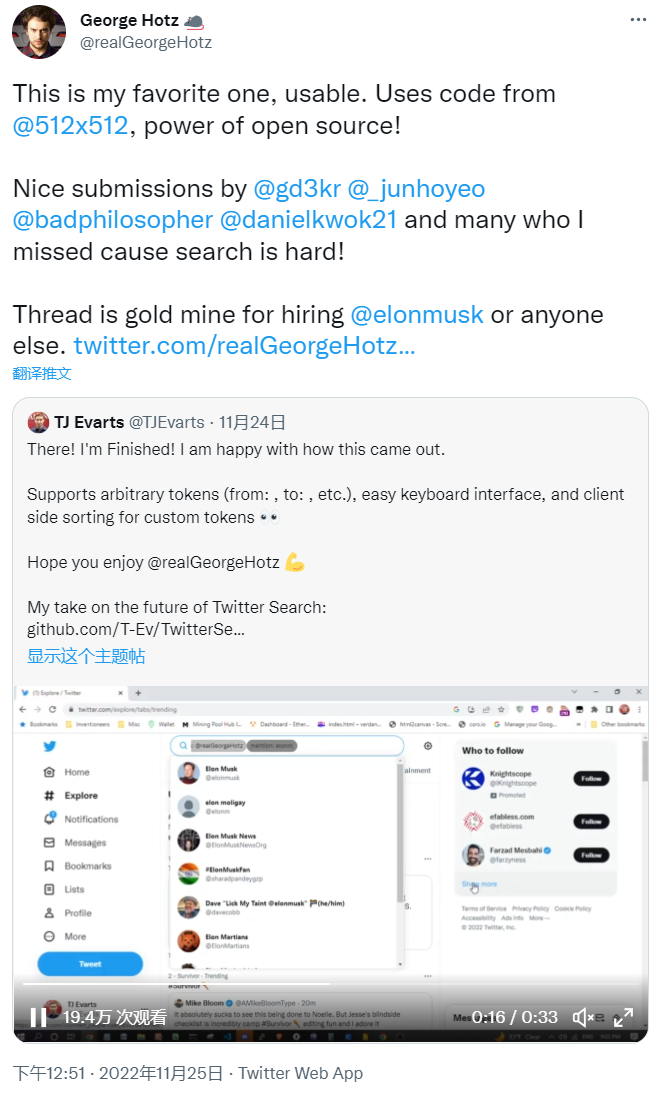 Related news
Genius.com accuses Google of copying its lyrics
The Moss code in the lyrics proves that Google stole the lyrics from Genius.
After the Genius dispute, Google responded that it would list the sources of the lyrics cited.
Google grabbed the lyrics from Genius website but didn't have actual copyright, the court found
Genius hacker Geohot promised Musk 12 weeks to fix Twitter search, but posted for help because he wouldn't react
Genius hacker Geohot has resigned from Twitter after about a month on the job
Hot news this week
The first in the world! Intelligent screening system for visual impairment of infants and young children
World's first: Sun Yat-sen University has developed a mobile phone intelligent screening system for infants with visual impairment
Beautiful country semiconductor ushered in the winter, US high enterprises inverted, our country market doesn't buy it!
Sources said Samsung Electronics is considering cutting chip production in the first quarter or a huge loss
See you again! High-speed rail overcrowding alarm can not drive without tickets passengers get off: 12306 said compliance
Cybertruck skipped tickets again! Mass production of Tesla electric pickup truck will not wait until 2024.
Intel: 14 generations of Core in the second half of the year, and build a new architecture from zero next year.
Apple will relax measures to deal with COVID-19 's epidemic and encourage employees to go back to work
Why Tesla crazy price reduction to more than 200,000 profit is still the highest? The truth is revealed!
Here comes the most advanced 3nm processor in the world! Apple A17 exposure: iP15 performance will be greatly upgraded
The most popular news this week
Meta earnings release analysts: Snap turning profit into loss in the fourth quarter is good news for it and Google
No 5G Huawei folding screen can still sell out! 1.44 million units a year, the domestic king
256G is not enough! Bloggers bought Xiaomi phone 512G has used up more than 300G: WeChat accounted for 70G
Regret that the medicine is gone! Apple closes downgrade channels for multiple versions such as iOS on 16-15-12.
The rendered picture of Meizu experience Center is exposed: there are cars and mobile phones to build 1000 stores.
Musk, the richest man in the world, also suffered a huge loss when he bought bitcoin by Tesla, who "cut leeks".
Samsung Huawei Xiaomi OV has been iterated many times! IP16 Pro still has no latent eyes.
At least 29000 facilities were affected, and WeiUnicom announced that there were serious loopholes in QTS and QuTS hero.
Tesla has sold most of its bitcoin and lost nearly 1.4 billion yuan in 2022
The biggest drop in history!