Why do laptops need more memory?

Understand computer friends all know, in addition to the processor, graphics card, memory can be said to be a very important hardware. The importance of memory has two parts, one is speed, the other is capacity.

In the daily use of computers, we may encounter the following problems:

1. When you open multiple software at the same time and switch between them, the computer will have a long or short sense of lag;

2. When processing pictures and videos, especially when rendering is needed after adding some filters, the system or software will occasionally be in suspended animation;

3. When watching 4K video through web page or client, if the page is cut away for a period of time and then cut back, the video will be stuck in a node, and it will be played smoothly again after a while.

If you've ever used a computer and made sure your processor and hard disk aren't outdated, it's probably due to a lack of memory capacity. So what are the specific manifestations of insufficient memory capacity in the real world? Let's illustrate this with a simple test.

Take 16GB memory as an example. After entering the system and opening some software, such as browser, wechat, Steam, live-streaming platform client, Office or PS/PR, the overall memory occupancy rate is already close to or even over 50%.

As shown in the following picture, the author did nothing after starting WPS, Photoshop and Chrome, plus the memory usage of the system itself.The 16GB space is already 47% occupied. 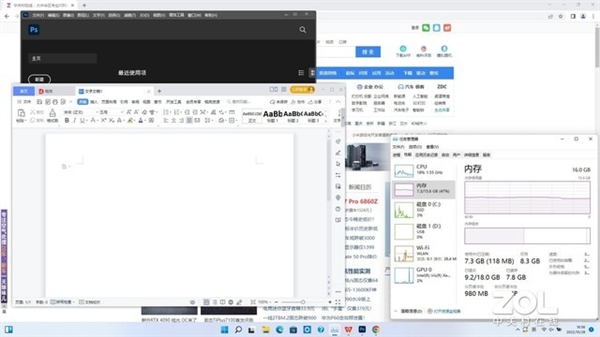 After opening WPS, Photoshop, and Chrome, the memory usage has reached 47%

Next we used the 16GB notebook to process large size images in Photoshop. As you can see, the 16GB space is completely used up very quickly, and it is extremely difficult to do anything else with 100% memory usage. For example, under the 100% memory usage rate of the author, even if the WPS document is opened for simple text input, there will be obvious lag and stutter feeling. 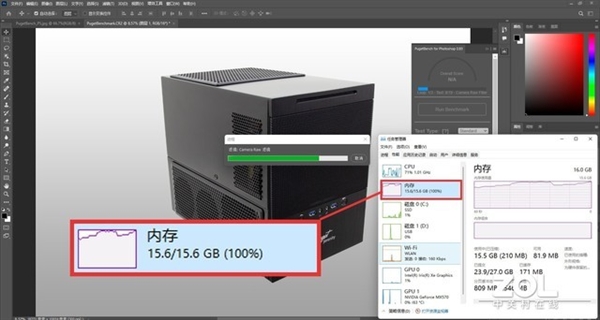 When the memory is full, text input will stumble and not flow smoothly

What about expanding memory?

We then did the same with a 32GB notebook, and we saw that the peak memory usage was only 69%. At this point, it was still very smooth to open a WPS document and input without any lag or stuttering. 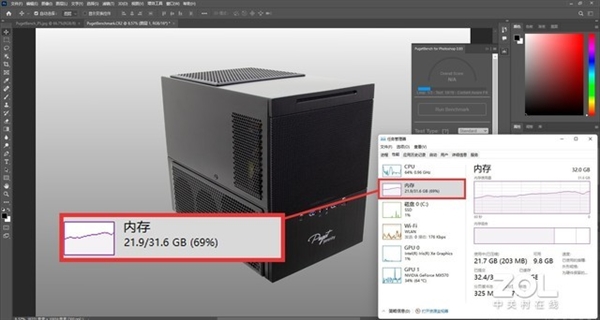 The peak memory usage of 32GB is 69%, which does not affect other applications

In fact, in the process of daily use of the computer, if you encounter the system, software inexplicable lag, at this time if you confirm that their processor, hard disk and other components are not outdated, or confirm that there is no virus, then most of the problem is the memory.

At the present stage, after Windows 10, Windows 11 system is opened, and then open some software for a while, the system memory usage will be more than 50%, or even more than 60%.

At this time, if some more memory applications are carried out, such as PS, LR diagram, PR clip, or open multiple software, multiple web pages, the computer will start to stall or hysteresis because of insufficient memory space. This is because after the memory space is filled, the CPU will call the temporary cache program in the memory slowly, especially when multiple software switch, there will be hysteresis.

For now, 16GB of RAM is the bare minimum, but 8GB for Windows 10 or 11 makes it difficult to run large programs and is suitable for simple office work or Web browsing. In fact, the most appropriate memory capacity is 32GB, which is difficult to fill under normal circumstances, so it will have a very smooth experience.

Related news
Does 3A platform have performance bonus? Analysis of AMD smart access memory technology
AMD will help NVIDIA GPU introduce smart access memory
NVIDIA responds to AMD's smart access memory with its own GPU direct access technology
Wastened by patent hooligan again? Irish Memory filed a patent infringement lawsuit against Apple
Hot news this week
The first in the world! Intelligent screening system for visual impairment of infants and young children
World's first: Sun Yat-sen University has developed a mobile phone intelligent screening system for infants with visual impairment
Beautiful country semiconductor ushered in the winter, US high enterprises inverted, our country market doesn't buy it!
Sources said Samsung Electronics is considering cutting chip production in the first quarter or a huge loss
See you again! High-speed rail overcrowding alarm can not drive without tickets passengers get off: 12306 said compliance
Cybertruck skipped tickets again! Mass production of Tesla electric pickup truck will not wait until 2024.
Intel: 14 generations of Core in the second half of the year, and build a new architecture from zero next year.
Apple will relax measures to deal with COVID-19 's epidemic and encourage employees to go back to work
Why Tesla crazy price reduction to more than 200,000 profit is still the highest? The truth is revealed!
Here comes the most advanced 3nm processor in the world! Apple A17 exposure: iP15 performance will be greatly upgraded
The most popular news this week
Meta earnings release analysts: Snap turning profit into loss in the fourth quarter is good news for it and Google
No 5G Huawei folding screen can still sell out! 1.44 million units a year, the domestic king
256G is not enough! Bloggers bought Xiaomi phone 512G has used up more than 300G: WeChat accounted for 70G
Regret that the medicine is gone! Apple closes downgrade channels for multiple versions such as iOS on 16-15-12.
The rendered picture of Meizu experience Center is exposed: there are cars and mobile phones to build 1000 stores.
Musk, the richest man in the world, also suffered a huge loss when he bought bitcoin by Tesla, who "cut leeks".
Samsung Huawei Xiaomi OV has been iterated many times! IP16 Pro still has no latent eyes.
At least 29000 facilities were affected, and WeiUnicom announced that there were serious loopholes in QTS and QuTS hero.
Tesla has sold most of its bitcoin and lost nearly 1.4 billion yuan in 2022
The biggest drop in history!