Guo Ming ð «  creates: apple MR head or extended to the second half of next year, mass production shipment is less than 5 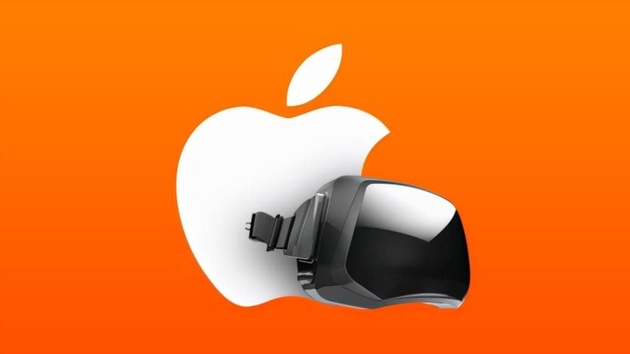 Apple's iPhone may be delayed.

On December 4th night, well-known apple analyst Guo Ming ð «  creates in a twitter post, according to the latest survey, points out that because of "software related problems", apple mixed reality show equipment (MR) may be delayed until the second half of 2023 will produce goods, and previously forecast is the second in 2023 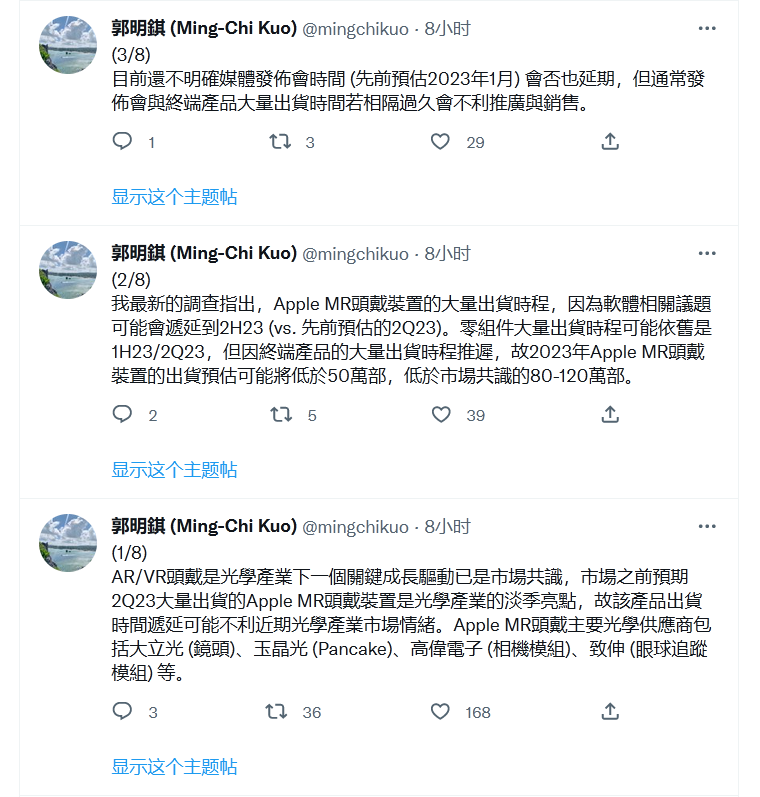 Guo Ming ð «  creates, points out that the amount of components of output goods time may is still in the first half of 2023 or in the second quarter of 2023, but the goods time delay because of the amount of end products output, is expected in 2023 apple head of shipments to be less than 500000 units, and the market is generally believed that will be shipped in 800000 to 1.2 million

"It is not clear whether the press conference (previously estimated January 2023) will also be extended, but generally a long time between the launch and the bulk of the end product delivery will be detrimental to promotion and sales." Guo Ming ð «  creates further

This is not a Guo Ming ð «  creates the first expected apple AR/MR head equipment will be delayed After June 7, Guo Ming ð «  creates on twitter that expected apple's AR (augmented reality)/MR (mixed reality) equipment shipping date will be postponed until the second quarter of 2023, in 2023 the first rather than market forecasts He said the development of Apple's headset has been affected by the pandemic.

Guo Ming ð «  creates also had said that the apple AR/MR head show equipment into the production will take some He believed that if Apple announced an AR/MR Device and operating system at WWDC in 2022, competitors would immediately copy Apple's brilliant ideas and beat Apple to the shelf by 2023.

Notably, Apple is ramping up development of a mixed reality (MR) headset, the first major new product category since the Apple Watch, Bloomberg reported on Dec. 2, citing people familiar with the matter. Apple has also renamed its companion operating system, "xrOS," a sign of a coming soon.

Related news
Hardware supply chain trial production encounters difficulties From the MR device that has repeatedly jumped tickets, we can glimpse Apple's meta-universe ambitions
Delayed head display equipment: MR industrial chain layout at a glance
Guo Mingzheng: The second -generation Apple AR/MR is expected to ship in the first half of 2025
Sources say apple's MR headset will be released in early 2023 and the second generation will have voice support
Apple's AR/MR device, which is expected to replace the iPhone in the next 10 years, could cost as much as 17,000 yuan
More powerful than iOS! Apple is working on an AR/MR Head-display operating system: It will debut next year
Foreign media: Apple MR Head display operating system "realityOS" development is finishing up internally
Guo Ming ð «  creates: apple MR head or extended to the second half of next year, mass production shipment is less than 5
Guo Ming ð «  creates: apple MR wore a device of shipment may be extended to the second half of next year, the year shipment forecast is lower than 5
Hot news this week
At least 29000 facilities were affected, and WeiUnicom announced that there were serious loopholes in QTS and QuTS hero.
The source code of the official website shows that the Microsoft Build 2023 developer Conference will be held on May 23-25.
The rendered picture of Meizu experience Center is exposed: there are cars and mobile phones to build 1000 stores.
Musk, the richest man in the world, also suffered a huge loss when he bought bitcoin by Tesla, who "cut leeks".
256G is not enough! Bloggers bought Xiaomi phone 512G has used up more than 300G: WeChat accounted for 70G
Xiaomi tablet 6 key specifications steal run: high brush domestic screen Snapdragon 870 can also play!
Beihang Professor unveils FIG Leaf, consumer anger, Why is advanced technology difficult to win user recognition?
Regret that the medicine is gone! Apple closes downgrade channels for multiple versions such as iOS on 16-15-12.
Only high-end models have? The exposure of the periscope camera lens is limited to the iPhone 16 Pro Max
Meta earnings release analysts: Snap turning profit into loss in the fourth quarter is good news for it and Google
The most popular news this week
Microsoft's new version of Bing appears briefly: full access to ChatGPT
Bill Gates: the history of ChatGPT is as significant as "PC or the birth of the Internet"
There is a character recognition function in Wechat, which is more convenient and practical than a dictionary! Have you ever used it?
EBay announced that it will cut 500 jobs, accounting for about 4% of its total workforce.
Why does the United States keep cracking down on Huawei, but we don't do anything to Apple?
Samsung promises firmware update to solve the problem of plummeting Pro SSD health value
AI such as CEO:ChatGPT, parent company of "GTA5", will raise standards in the game industry.
Huawei's entry into the electric bicycle Tailing official announced that the combination of strong and powerful forces will open a new era.
Huawei P60 appeared and ran: it was quite unexpected to carry the processor.
Yingchi set foot in the game display for the first time: 27-inch 2K screen, 165Hz high brush