Will Jia Yueting return to China next week? FF released the Go Home poster: it may land in China

With the Spring Festival of the Year of the Rabbit coming this week, FaradayFuture's official Weibo account released a poster titled "Go Home" today, which has sparked discussion. Some netizens speculated that Jia Yueting will return to China next week. .

Judging from two sets of posters, Jia may not be returning to China for a while yet.

First of all, let's look at the first poster. On the left side of the picture is a poem written by Su Shi in the book "Ding Storm · Don't listen to the sound of beating leaves through the forest" :"Looking back has always been bleak, return, neither rain nor shine." Guhuangzhou belongs to Hubei Province, which is consistent with the previously rumored landing direction of FF China headquarters. 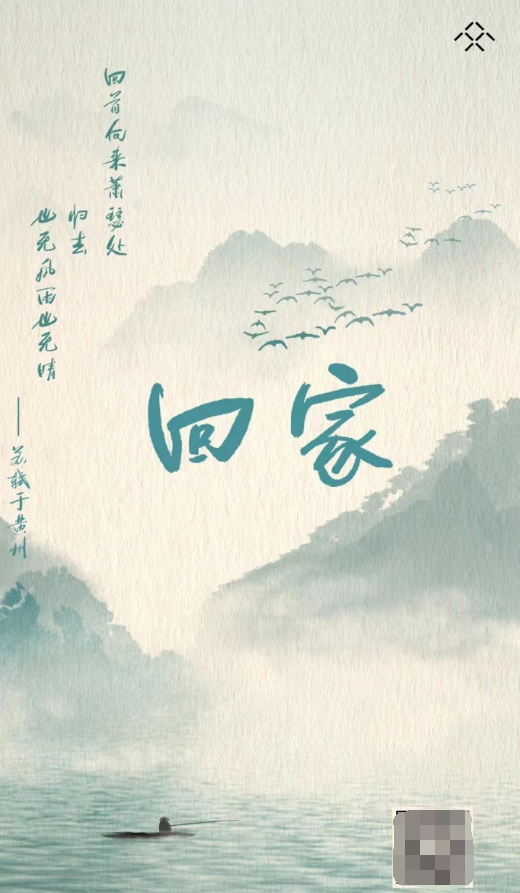 It is understood that according to FF's previous plan, FF China will choose a city in the south, Wuhan is one of them, but FF side said that there is a risk of legal disclosure, the specific situation can not be disclosed.

And in another poster, the FF 91 Futurist is parked in a cargo hold,Outside was a cargo plane marked "International Cargo Air" on its fuselage,Perhaps it was a sign that the car was about to go on display back home.

"Three years of hard work, how sad and bitter. A bag, thousands of thoughts and care. Year of the rabbit Spring Festival countdown 5 days, go home, rain or shine! Where there is a home, there is a fire of faith." 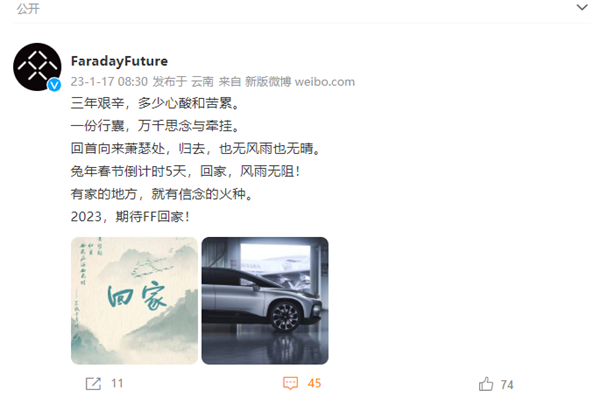 It is known thatFF expects to begin mass production of the saleable FF 91 Futurist at the end of March 2023, which is expected to roll off the assembly line in early April and be delivered before the end of April.But it would need $150 million to $170 million to come through in time, as well as timely shareholder approval to increase the number of authorized shares.

In November, FFIE's board of directors appointed FF China CEO Chen Xuefeng as Faraday Future's global CEO. Officials said the company's top priorities are to deliver FF 91 Futurist to customers as quickly as possible, at a low cost and with high quality. To maximize the interests of Faraday Future shareholders.

Related news
Jia Yueting clarifies the asset doubt again and says FF 91 can be mass produced in China
FF CEO: looking for a partner in China Jia Yueting hopes to return to China as soon as possible
Jia Yueting dug up a big guy! Former Maserati executive joined FF as China CMO
Jia Yueting's bankruptcy reorganization is confirmed by the US court that FF will be implemented in China?
After Jia Yueting's "restart life", he first said that the FF key technology of living by borrowing money is not inferior to Tesla?
Will Jia Yueting return to China next week? FF released the Go Home poster: it may land in China
Hot news this week
The first in the world! Intelligent screening system for visual impairment of infants and young children
World's first: Sun Yat-sen University has developed a mobile phone intelligent screening system for infants with visual impairment
Beautiful country semiconductor ushered in the winter, US high enterprises inverted, our country market doesn't buy it!
Sources said Samsung Electronics is considering cutting chip production in the first quarter or a huge loss
See you again! High-speed rail overcrowding alarm can not drive without tickets passengers get off: 12306 said compliance
Cybertruck skipped tickets again! Mass production of Tesla electric pickup truck will not wait until 2024.
Intel: 14 generations of Core in the second half of the year, and build a new architecture from zero next year.
Apple will relax measures to deal with COVID-19 's epidemic and encourage employees to go back to work
Why Tesla crazy price reduction to more than 200,000 profit is still the highest? The truth is revealed!
Here comes the most advanced 3nm processor in the world! Apple A17 exposure: iP15 performance will be greatly upgraded
The most popular news this week
Meta earnings release analysts: Snap turning profit into loss in the fourth quarter is good news for it and Google
No 5G Huawei folding screen can still sell out! 1.44 million units a year, the domestic king
256G is not enough! Bloggers bought Xiaomi phone 512G has used up more than 300G: WeChat accounted for 70G
Regret that the medicine is gone! Apple closes downgrade channels for multiple versions such as iOS on 16-15-12.
The rendered picture of Meizu experience Center is exposed: there are cars and mobile phones to build 1000 stores.
Musk, the richest man in the world, also suffered a huge loss when he bought bitcoin by Tesla, who "cut leeks".
Samsung Huawei Xiaomi OV has been iterated many times! IP16 Pro still has no latent eyes.
At least 29000 facilities were affected, and WeiUnicom announced that there were serious loopholes in QTS and QuTS hero.
Tesla has sold most of its bitcoin and lost nearly 1.4 billion yuan in 2022
The biggest drop in history!