A US state plans to ban the sale of electric cars congressman: do not like the proposal of "banning the sale of fuel vehicles"

Six Republican state senators from Wyoming introduced a billThey support a gradual ban on the sale of electric cars in the state by 2035And explained that this would ensure the stability of the local oil and gas industry and help protect the country's important minerals.

Proposal to gradually ban the sale of electric vehicles

In the state's history, the oil and gas industry has created countless jobs and contributed income, four state senators and two state representatives wrote in a joint statement. At the same time, fuel vehicles also provide effective support for other industries in the state. 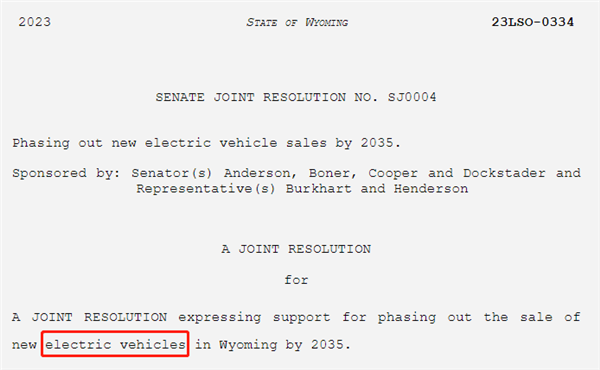 Six Republican state lawmakers point out that roads in Wyoming are longerAnd lack of charging infrastructure, it is difficult to widely use electric vehicles.. In addition, in terms of key minerals in electric vehicle batteries, not only the domestic supply in the United States is limited, but they are not easy to recover and dispose of.

The joint statement also stressed that in order to improve the ability of electric vehicles to cope with unexpected situations, the United States also needs to increase the power supply of ldquo; and rdquo;. On the other hand, the oil industry already employs thousands of people in the state, and the electrification of cars could threaten their jobs.

The bill, which was submitted to the state legislature on Friday, ended with asking the secretary of state to send copies of the bill to President Joe Biden, Senate Majority Leader Chuck & middot; Schumer, House Speaker Kevin & middot; McCarthy, the governor and congressman of Huizhou and California Governor Gavin & middot; Newsom.

The sponsor of the proposal gave an explanation.

Cooper said it achieved its goal, with about 3/4 of responses to the proposal & ldquo; biased support & rdquo;. He admits that the idea of banning the sale of electric cars by ldquo; & rdquo; is absurd, but it is not as absurd as the rdquo; & ldquo; 's ban on the sale of fuel vehicles.

Cooper also pointed out that states such as California have decided to phase out all new fuel vehicles by 2035, which is why the proposal should be sent separately to Gavin & middot; Newson. & ldquo; we did our part and we made our position in a statement. I don't know if other states will stand up like Huizhou. & rdquo

On Monday, local time, state senator Jim Anderson, who is also the sponsor, told the mediaThey & ldquo; do not like & rdquo; states that propose to ban the use of fuel cars & ldquo; I do not agree with the demand for a ban on the purchase of fuel vehicles. & rdquo

According to the data, the number of gasoline vehicles registered in Wyoming reached 480000 in 2021, while the number of electric vehicles was only about 500, ranking second from the bottom of the United States, after about 400 in North Dakota.

Another sponsor, state senator Brian Boner, also told the media that this is a symbolic proposal for ldquo; & rdquo;, which is intended to trigger discussion on the electrification of cars. He pointed out that the United States does not actually have a ldquo; coherent & rdquo; plan for electrification transition, but this transition may have a significant negative impact on the quality of life of Huizhou people.

Related news
US space force
$64.99: Microsoft launches new Xbox wireless handle with electric volt color matching
Top Secret Way To Win Lottery With The Help Of A Magic spell
I NEED MY EX BACK WITH THE HELP OF A SPELL CASTER 2021
I NEED MY EX BACK WITH THE HELP OF A REAL SPELL CASTER 2021
I Need My Ex Back With The Help Of A Spell Caster 2021/2022
China's New Energy Vehicle Sales in June Expected to Set New High over Fiscal Stimulus
Hot news this week
The first in the world! Intelligent screening system for visual impairment of infants and young children
World's first: Sun Yat-sen University has developed a mobile phone intelligent screening system for infants with visual impairment
Beautiful country semiconductor ushered in the winter, US high enterprises inverted, our country market doesn't buy it!
Sources said Samsung Electronics is considering cutting chip production in the first quarter or a huge loss
See you again! High-speed rail overcrowding alarm can not drive without tickets passengers get off: 12306 said compliance
Cybertruck skipped tickets again! Mass production of Tesla electric pickup truck will not wait until 2024.
Apple will relax measures to deal with COVID-19 's epidemic and encourage employees to go back to work
Intel: 14 generations of Core in the second half of the year, and build a new architecture from zero next year.
Why Tesla crazy price reduction to more than 200,000 profit is still the highest? The truth is revealed!
Here comes the most advanced 3nm processor in the world! Apple A17 exposure: iP15 performance will be greatly upgraded
The most popular news this week
Meta earnings release analysts: Snap turning profit into loss in the fourth quarter is good news for it and Google
No 5G Huawei folding screen can still sell out! 1.44 million units a year, the domestic king
256G is not enough! Bloggers bought Xiaomi phone 512G has used up more than 300G: WeChat accounted for 70G
Regret that the medicine is gone! Apple closes downgrade channels for multiple versions such as iOS on 16-15-12.
The rendered picture of Meizu experience Center is exposed: there are cars and mobile phones to build 1000 stores.
Musk, the richest man in the world, also suffered a huge loss when he bought bitcoin by Tesla, who "cut leeks".
Samsung Huawei Xiaomi OV has been iterated many times! IP16 Pro still has no latent eyes.
At least 29000 facilities were affected, and WeiUnicom announced that there were serious loopholes in QTS and QuTS hero.
Tesla has sold most of its bitcoin and lost nearly 1.4 billion yuan in 2022
The biggest drop in history!