The ranking of the top 10 semiconductor manufacturers in the world in 2022 was announced: Intel No. 2, AMD No. 7

This is a far cry from last year's growth rate of 25%, which also shows that chip makers are in a bad predicament.

The storage market is the worst-performing semiconductor segment, down 10% from the previous year, and worse could come in 2023, according to the report.

Last year got off to a good start for many chipmakers, as demand rebounded once the economy began to emerge from the pandemic, with some companies finding the need to increase production to meet component shortages.

& ldquo;2022 at the beginning of the year, there was a shortage of many semiconductor devices, resulting in longer delivery times and higher prices, resulting in reduced production of electronic equipment in many end markets. As a result, OEM began to hedge against shortages by hoarding chip inventory, said Andrew Norwood, vice president analyst at ldquo;Gartner.

But as the conflict between Russia and Ukraine broke out and inflation and high interest rates began to dampen spending, semiconductor companies began to see demand evaporate as many OEM decided to run out of inventory before buying new supplies.

Norwood said: & ldquo; by the second half of 2022, the global economy began to slow under the pressure of high inflation, higher interest rates, higher energy costs and Chinese mainland's continued zero-clearing policy of COVID-19, which affected many global supply chain manufacturers.

According to Gartner's ranking of global semiconductor companies, the largest companies seem to perform best. Among them, the total revenue of the top 25 semiconductor suppliers increased by 2.8% in 2022, accounting for 77.5% of the market share.%。 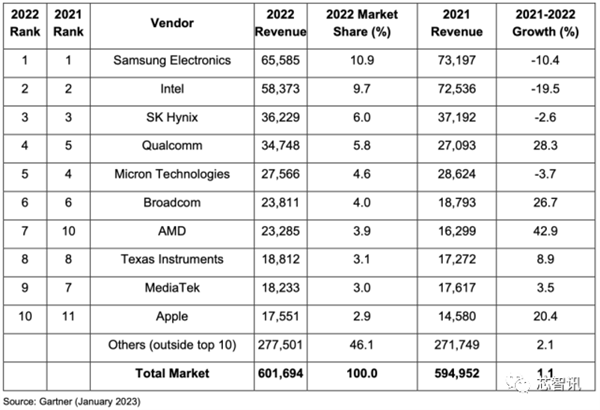 Samsung Electronics remains at the top of the list of the world's top 10 semiconductor manufacturers, although its revenue actually fell 10 per cent to $65.585 billion from $73.197 billion in 2021. According to Gartner, this is mainly due to the decline in demand for DRAM and NAND.

Intel ranked second with $58.373 billion in revenue, but sales fell 19.5% year-on-year due to falling demand in the consumer PC market and fierce competition in its core x86 processor business.

At the same time, although memory chips accounted for about 25 per cent of semiconductor sales in 2022, they suffered the biggest decline, down 10 per cent from the previous year.

Gartner said that by mid-2022, the storage market had shown signs of a sharp collapse in demand, as OEM began to deplete the storage inventory they had held in response to stronger demand.

The situation has deteriorated to the point that most storage companies have announced cuts in capital spending in 2023, and some have cut wafer production to reduce inventory levels and try to rebalance the market.

Last year, Gartner predicted that overall semiconductor growth would be negative in 2023 and begin to recover next year.

Last year, Gartner predicted that overall semiconductor growth would be negative in 2023 and begin to recover next year.

At the same time, non-memory chip revenue actually grew by 5.3% in 2022, but the situation varies from market segment to market segment. The strongest growth was in analog chips, up 19% from a year earlier, followed by discrete components, up 15% from 2021.

Gartner said the growth in analog and discrete devices was driven by strong demand in the automotive and industrial end markets, thanks to growth trends in automotive electrification, industrial automation and energy transformation.

Related news
Why do some cities in the United States choose to say "NO" to 5G?
Ice and snow 2 set a number of records: China's single day box office of imported animation No.1
No to Chrome, and Firefox and Safari will be the winner?
Iqoo becomes the leader of 5g mobile phones in China: ranking No.1 with 54.3% market share
Experts say: there will be a price war between AMD and Intel sooner or later
China's AI No.1 was pulled into the "blacklist" by the United States for the second time: it is at a critical juncture
Hot news this week
The first in the world! Intelligent screening system for visual impairment of infants and young children
World's first: Sun Yat-sen University has developed a mobile phone intelligent screening system for infants with visual impairment
Beautiful country semiconductor ushered in the winter, US high enterprises inverted, our country market doesn't buy it!
Sources said Samsung Electronics is considering cutting chip production in the first quarter or a huge loss
See you again! High-speed rail overcrowding alarm can not drive without tickets passengers get off: 12306 said compliance
Cybertruck skipped tickets again! Mass production of Tesla electric pickup truck will not wait until 2024.
Intel: 14 generations of Core in the second half of the year, and build a new architecture from zero next year.
Apple will relax measures to deal with COVID-19 's epidemic and encourage employees to go back to work
Why Tesla crazy price reduction to more than 200,000 profit is still the highest? The truth is revealed!
Here comes the most advanced 3nm processor in the world! Apple A17 exposure: iP15 performance will be greatly upgraded
The most popular news this week
Meta earnings release analysts: Snap turning profit into loss in the fourth quarter is good news for it and Google
No 5G Huawei folding screen can still sell out! 1.44 million units a year, the domestic king
256G is not enough! Bloggers bought Xiaomi phone 512G has used up more than 300G: WeChat accounted for 70G
Regret that the medicine is gone! Apple closes downgrade channels for multiple versions such as iOS on 16-15-12.
The rendered picture of Meizu experience Center is exposed: there are cars and mobile phones to build 1000 stores.
Musk, the richest man in the world, also suffered a huge loss when he bought bitcoin by Tesla, who "cut leeks".
Samsung Huawei Xiaomi OV has been iterated many times! IP16 Pro still has no latent eyes.
At least 29000 facilities were affected, and WeiUnicom announced that there were serious loopholes in QTS and QuTS hero.
Tesla has sold most of its bitcoin and lost nearly 1.4 billion yuan in 2022
The biggest drop in history!